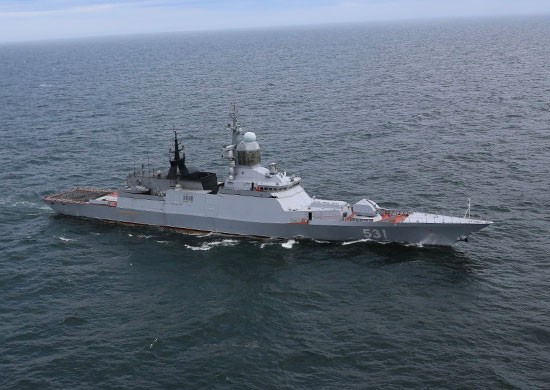 The vessels are part of Russia’s Baltic Fleet and have helicopters and marine infantry units on board.
Read in Russian | Читать по-русски
By

It is the 2,200 ton big «Soobrazitelny» and «Stoiky» that early this week set out from Baltiisky, the naval base in the Baltic Sea. They are accompanied by tug «Konetsky» and 5000 tons oil tanker «Kola».

The latter vessel is now on its way through the Danish straits with course for the North Sea, ship tracking data show.

According to the Russian Navy, the two corvettes are on a planned voyage, the main purpose of which is to «show presence and demonstrate the St Andrew’s Flag [the Russian Navy ensign] in various parts of the Atlantic Ocean».

On board are KA-27PS (Helix-D) helicopters and a crew which includes special trained units of marines, the Navy informs.

A wide range of exercises will be conducted, including anti-aircraft and anti-submarine defense, joint communication and supply operations.

The helicopters will conduct navigation training and exercise search of enemy submarines, detection of surface targets and engage in search and rescue operations.

The «Soobrazitelny» and «Stoiky» are both part of Russia’s new class of Steregushchiy-class corvettes. The were delivered to the Baltic Fleet in 2008 and 2014 respectively.

It is not the first long-distance voyage to the North Atlantic for the corvettes. In June this year, the «Stoiky» and sister ship «Boiky» carried out a 3,000 nautical miles voyage in the region.

The Steregushchiy-class is categorized as corvettes by the Russian Navy, but is because of its size considered as frigates by NATO countries. A total of six vessels of the class have been built, another seven are under construction. They have a top speed of 27 knots, a crew of 99 and a 4,000 miles range. Their weaponry include A-190 and AK-630M artillery systems, as well as supersonic anti-ship cruise missile system Kh-35 Ural, Redut medium-range surface to air missile system and torpedos.

On their way north, the Russian ships will be closely followed by NATO ships and aircrafts. Their voyage coincide with the rehearsal Trident Juncture, the biggest joint NATO drills in several years. In the period from 25th October to 7th November, more than 50,000 soldiers, 250 aircrafts and 65 vessels from 31 countries will engage in wide-ranging training along the coast of Norway, including the surrounding areas of the North Atlantic and the Baltic Sea, as well as Iceland and the airspace of Finland and Sweden.

As part of the training scenario, Norway is attacked by the fictive state «Murinus» and NATO countries will come to assist.

Participating in the drills is also the U.S aircraft carrier «Harry S. Truman».

Parallel to the Trident Juncture is taking place a smaller exercise called Northern Screen, which includes the about 700 U.S Marines currently based in central and northern Norway.