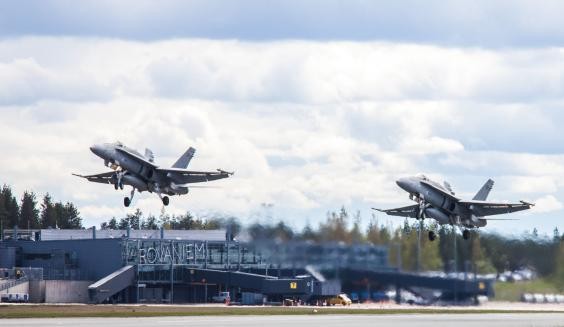 A team of Russian officers has arrived in northern Finland to conduct a confidence and security-building evaluation visit of the Lapland Air Command, according to Finnish military officials.
Read in Russian | Читать по-русски
By

The three-day visit that began Monday conforms with the 2011 Vienna Document, an agreement between the participating states of the Organization for Security and Co-operation in Europe (OSCE) to implement confidence and security building measures among them, said Maj. Arto Toivanen at Defence Command Finland.

The purpose of the visit to Rovaniemi, the capital of Lapland, is to evaluate whether the information on Lapland Air Command in Finland’s 2011 exchange of military information corresponds to the current information that will be given to them during the evaluation visit, Toivanen said in a phone interview.

“It’s all about openness and transparency in order to create confidence and security,” Toivanen said. “In simple terms it would be like you have a new neighbour that you know nothing about, he might be intimidating or frightening because you don’t know that he is just a jolly good fellow.

“Until you know your neighbour, he might be seen as a stranger and maybe not even a trustworthy one. But little by little, after having a few barbeques with them, you learn to know that they are just like us.”

Checking facts on the ground

The Russian team would be looking into whether information Finland supplied to the OSCE on paper corresponds to what they find on the ground: things such as maximum peace time personnel strength, the main equipment and main weapons systems, including the number of F-18 Hornet fighter jets at the Lapland Air Command, Toivanen said.

“In an evaluation visit, a delegation with diplomatic status arrives to the country and goes into the unit that they are interested in to verify the numbers given at the beginning of the year,” he said. “During the course of the evaluation, the evaluation team will be briefed and shown the equipment at the present state in that unit.”

The host country would have to explain significant discrepancies between reported personnel strength and equipment, and what the evaluation team finds on the ground, he said.

In case of Finnish F-18 Hornet fighter jets, two are in repair and one is on an exercise in Alaska, Toivanen said.