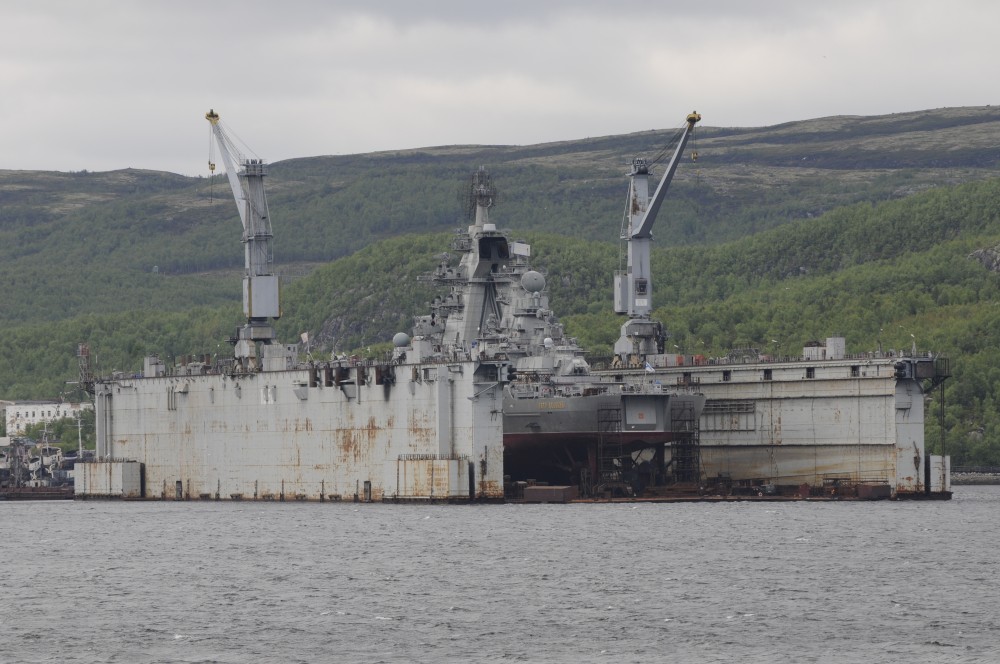 The floating dock in Roslyakovo is now on the bottom of the Kola Bay. Photo: Thomas Nilsen

The 23,000 square meter big installation that sunk in the waters near Murmansk hinders shipping in the area, explains Minister of Industry and Trade Denis Manturov.
Read in Russian | Читать по-русски
By

The minister makes clear that 80,000 ton big dock that now is located on 40 meters depths in the Kola Bay will have to be lifted. But he does not specify when it will happen, nor how the operation will be conducted.

Manturov during a conference this week told journalists that huge sunken dock now hampers navigation in the area around Shipyard No 82, the military ship repair plant in Roslyakovo.

A group of divers are now cutting out metal pieces of the installation in order to check their quality, he told newspaper Kommersant. If the dock has been significantly damaged in the accident and the metal is of bad quality, the lifting operation could prove itself highly complicated.

Experts consider ways to lift the huge dock. One alternative is to seal internal parts of the installation and subsequently fill them with air, which could help it resurface. Another alternative is use of cranes. «However, in our case there is not a single crane that would be able to cope with the task,» a representative of the United Shipbuilding Corporation, a state company, told the newspaper.

The sinking of the dock happened as repair works were made in the making on aircraft carrier «Admiral Kuznetsov». The vessel was damaged in the accident as one of the dock major crane fell over the ship deck. But damage is of only minor character, Navy representatives say. They also make clear that the sinking of the floating dock will not affect the ongoing upgrade of the ship, RIA Novosti reports.

The floating dock in Roslyakovo was Russia’s biggest of the kind and has played a crucial role in technical  repairs of the country’s biggest naval vessels, among them aircraft carrier «Admiral Kuznetsov».

It was built in 1980 in Sweden and towed to the Kola Peninsula.

A source close to the Ministry of Defense confirms to Kommersant that the sunken dock was the only place in all of Russia where the biggest navel vessels could undergo repair and upgrade, and that works on these vessels now will have to postponed indefinitely.

Another source from the ship repair companies in Severodvinsk, near Arkhangelsk, argues that both the Sevmash and the Zvezdochka yards have dry docks that can be applied.

The building of a new dock of the kind would take years. Only the project development phase would require up to two years.