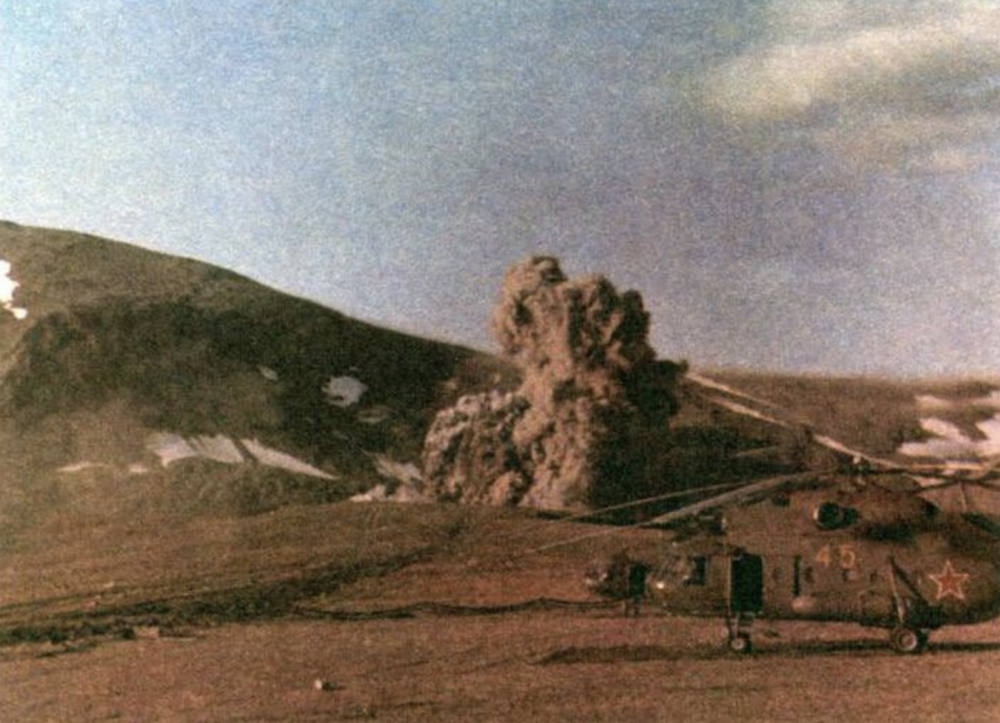 A dust cloud rises several tens of meters out of the tunnel at Moiseev mountain.

The photo of a nuclear bomb test going terribly wrong in August 1987 is revealed by a Russian blogger.
Read in Russian | Читать по-русски
By

It is two hours past midnight on August 2nd 1987 when the Soviet nuclear weapons scientists push the button triggering a series of five nuclear devises inside a tunnel at the Matochkin Shar nuclear testing site.

A load boom follows and the ground is shaking like an earthquake. A huge dust cloud blows out from the tunnel supposed to be hermetical sealed by meters thick stone- and concrete walls.

The radioactive dust cloud came as a big surprise to the personnel witnessing.

Now, more than 30 years later, a photo from the accident is published by Russian blogger who focuses on nuclear thematic and also posts photos on twitter.

Leakage of radioactivity from the August tests in 1987 is known from before, listed in a 2005 publication by Science and Global Security. Now, the photo from the site gives the public a better understanding of the size of tunnel collapse.

The photo is taken no more than a kilometer from the tunnel entrance and shows a military helicopter parked in in front. Each of the tunnels in the area where underground nuclear weapons testing took place from 1964 to 1990 has its own code number. The one collapsing on this photo is known as tunnel A-37A.

According to a list of all underground nuclear weapons tests at Novaya Zemlya, published by Science and Global Security, the total yield of the five devises exploded on August 2nd were 150 KT, ten times the size of the bomb dropped on Hiroshima in 1945.

The leakages of radioactivity was estimated to 56 TBq. The gamma radiation near the entrance to the tunnel was measured to more than 500 R/h. First radioactive gases were detected 90 seconds after the blast.

500 R/h is about 1000 times the annual dose for an average human. Exposed directly, such dose could be lethal within an hour or two.

In the book USSR Nuclear Explosions about the northern test site at Novaya Zemlya, published in 1991, a group of Soviet radiation experts writes about the accident. «A powerful burst of a radioactive gas-jet.stream occurred just above the mouth of the adit, just 1,5 minutes after the explosion. It was later established that gas penetrated along a geologic fault that extended along the adit axis and hot gases melted the surface ice.»

The authors describe how an emergency program was immediately instituted evacuating all staff within a period of a few minutes. No cases of radiation sickness occurred amon the test site personnel at Novaya Zemlya.

Mountian Moiseev, where the nuclear weapons tests took place, is located about 10 kilometers south of Severny, the military settlement on the shores of the Matochkin Shar serving as the centre for the nuclear test site.