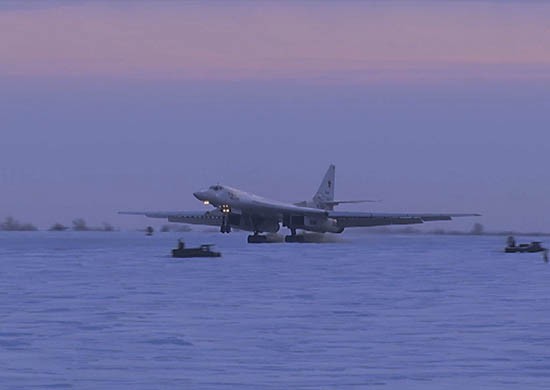 A pair of strategic bombers crossed the skies of the Barents-, Kara- and Laptev Seas.
Read in Russian | Читать по-русски

Freezing cold and bluish-dark polar night are no hinders. The Arctic is of strategic military importance for Russia. Flashing muscles is good way to show readiness.

This weekend, two nuclear capable Tu-160 bombers carried out a 15hours flight in international airspace over the Arctic Ocean, the Barents Sea, Kara Sea and all east to the Laptev Sea, the Defense Ministry reports.

The flights lasted so long that mid-air refueling was carried out.

On Saturday, the press service of the Northern Fleet informed that the navy’s newest frigate, “Admiral Gorshkov” sailed out from Severomorsk to the Barents Sea for a set of combat training tasks.

Shootings at both sea and air targets are on the list of exercise duties. In early December, the same frigate test-fired the sea-based version of the supersonic Kalibr cruise missile, the Barents Observer reported.

Port authorities of Murmansk has issued a long list of warnings for areas in the Barents Sea where shootings, both artillery and rockets, will take place over the next week. The warnings are issued to inform fishermen and commercial vessels to stay away.