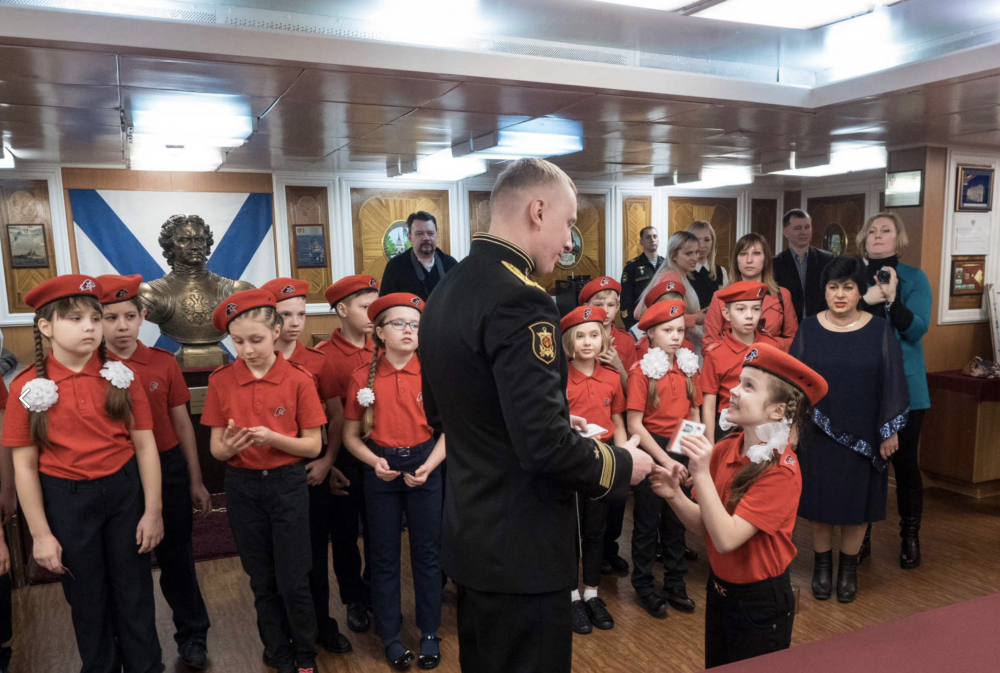 Children aged from eight were sworn into the Youth Army onboard the the nuclear-powered missile cruiser "Pyotr Veliky" in Severomorsk. Photo: Press service of the Northern Fleet

With additional 200 children getting their red berets this weekend, there are now more than 9,500 members of Yunarmiya in the towns of Russia’s Northern Fleet.
Read in Russian | Читать по-русски
By

Allegations are coming in from different corners of Russia that schoolchildren of parents serving in the military are forced to join the ranks of Yunarmiya, the military-patriotic movement created with support from the Defense Ministry.

A telegram order from January 29th, signed by acting head of the Eastern Military District’s military-patriotic work, makes it clear:

«The absence of officers’ children in the rows of the Yunarmiya movement is to be seen as a lack of understanding among servicemen of the basis of state policy in the field of patriotic upbringing of citizens.»

The document is reposed on social media.

Another report from Vkontakte, reported by Murmansk-based news agency B-Port, tells about a resident of the military closed town of Gadzhiyevo who complains about her child being forced to join Yunarmiya. The order is allegedly sent to multiple military units and applies to officers with children aged eight to 18.

Gadzhiyevo is the base for the Northern Fleet’s ballistic missile submarines on the coast of the Barents Sea.

This weekend, the Vkontakte page of Yunarmiya for the Murmansk region is packed with photos of children receiving the red beret and diplomas for teaming up with the Youth Army. Stories are posted from several of the closed towns of the Northern Fleet, like Severomorsk, Zaozersk and Gadzhiyevo.

Russia’s Defense Ministry writes in a report that 179 schoolchildren from 11 cities and towns in the Murmansk region were «accepted into the ranks of the All-Russian military patriotic public movement Yunarmiya. The ceremonies took place onboard the warships «Pyotr Velikiy», «Marshal Ustinov», «Admiral Levchenko» and «Vice-Admiral Kulakov».

According to the ministry, more than 9,500 schoolchildren in the closed towns of the Northern Fleet are now members of the Youth Army.

As previously reported by the Barents Observer, there are now more than 72 local Yunarmiya units in the Murmansk region.

About itself, Yunarmiya writes it is «the Russian youth movement, whose main goal is development of comprehensive patriotic education of Russians from 8 years old.»

A goal, the text on the movement’s portal reads, is to «form a positive motivation among young people to undergo military service and prepare young men for service in the Armed Forces of the Russian Federation.»