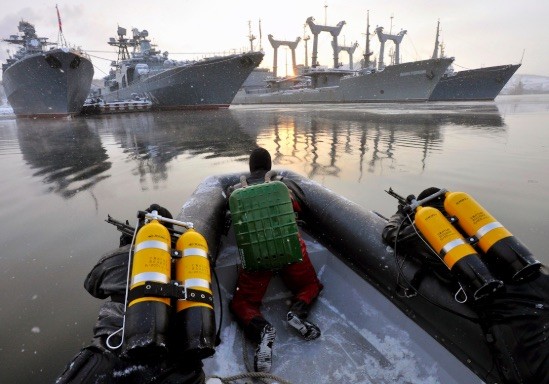 A new unit is established for guarding and protection of the vessels based in the Kola Peninsula.
Read in Russian | Читать по-русски
By

The unit includes special purpose soldiers trained in counter-sabotage operations. They all serve on contracts and have expertise on underwater operations. Many have previous experience from various special-purpose missions, the Northern Fleet informs.

The unit was formally established on 1 February.

As part of the opening ceremony, a group of soldiers showed off their capabilities in a staged exercise in the waters of Severomorsk, the Northern Fleet headquarter city.

The soldiers will also serve as a rapid reaction force in case of an attack against naval towns and facilities in the area. They are armed with weapons that can be applied both under and over water and have a number of quick patrol vessels that facilitates rapid mobility.

The Northern Fleet is the most powerful of Russia’s five fleets. It is based in Severomorsk, the Kola Peninsula, and includes about 35 surface vessels. Among them are aircraft carrier «Admiral Kuznetsov» and battle cruiser «Pyotr Veliky». The newest ship in the fleet is the «Admiral Gorshkov», a 4500 tons heavy, 135 meters long frigate that is designed to execute long-range strikes, conduct anti-submarine warfare and to carry out escort missions.