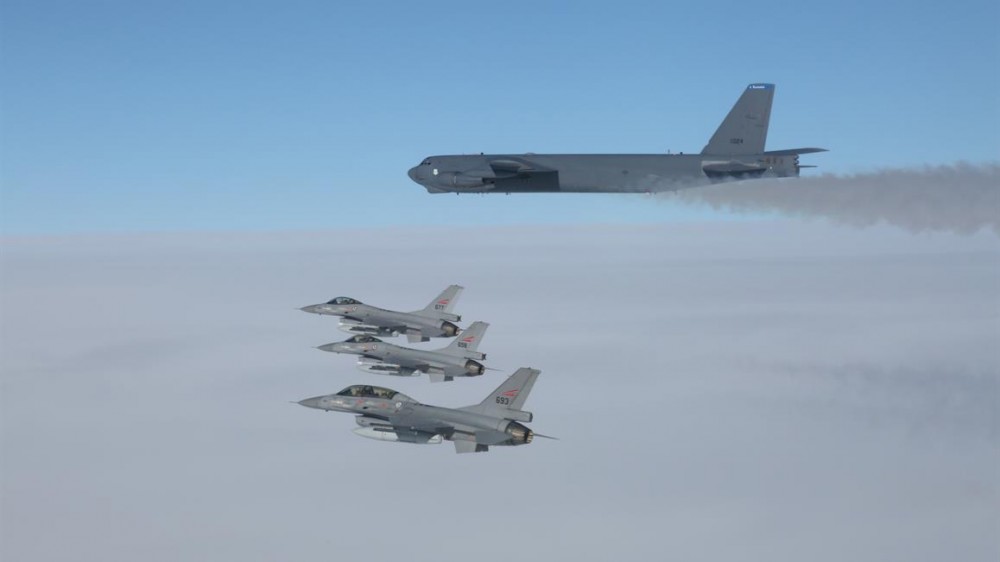 Both the American B-52 and the Russian Tu-160 are capable of carrying nuclear weapons.
Read in Russian | Читать по-русски
By

The turmoil came after US accused Russia of developing and deploying a cruise missile capable of carrying a nuclear warhead and with a range between 500 and 5,500 km, the distance banned by the INF-treaty.

NATO’s Secretary General Jens Stoltenberg in February said the alliance “have wide range of options - conventional and other options” to deal with what NATO calls a “Russian violation” of the INF-treaty.

Stoltenberg did not mention the American B-52 bombers, but the planes are indeed one way for NATO to show Moscow that nuclear weapons can be brought closer to the Russian border. Although nuclear capable, it is not believed that neither the B-52s nor the Tu-160 carry nukes on training missions.

Six US Air Force B-52 bombers were deployed to Fairford Air Base in the United Kingdom. From the base, the strategic bombers have regularly been on missions in northern Europe. From the east, Russian Tu-160 and Tu-95 bombers are regularly flying on missions to international air space via the Barents Sea.

On Thursday, March 28th, five the giant B-52 bombers flew over the Norwegian Sea, according to a statement from the US Air Force Europe. The planes continued to towards Iceland.

«During the flights, five B-52s conducted training with Norwegian F-16 fighter jets,» the statement reads and continues: «Training with NATO allies like Norway enhances the capabilities and readiness of the alliance.»

The U.S. Air Force underlines the importance of training missions enabling crews to maintain a high state of readiness and proficiency, and validate the «always-ready global strike capability.» Last week, a B-52 bomber from the air base in United Kingdom was on Barents Sea mission. At the same time, other B-52 planes were flying the in the Baltic, the Black Sea and outside Russian airspace in the Far East.

On Thursday, also Russian strategic bombers came on southbound flight for the second time this week outside Norwegian airspace, from the Barents Sea, over the Norwegian Sea, to the North Sea north of United Kingdom.

«We monitor them with different types of means like sensors, radar and aircraft,» Major Eikeland says to the Barents Observer.

NATO’s Quick Reaction Alert (QRA) at Bodø Air Base just inside the Arctic Circle in Norway is aimed at both identifying foreign aircraft and show its own presence.

«We do not want to detail the flight patterns and exact locations,» Eikeland says, but underlines that two following days with Russian planes flying outside Norway «is neither sensational nor abnormal.»

She tells that Norwegian F-16s fighter jets were scrambled to identify the Russian bombers on Thursday, March 28th.

The Russian planes were a pair of Tu-160 strategic bombers. MiG-31 fighter jets followed the two planes and since the flight lasted for 13 hours, mid-air fueling was conducted, Russia’s Defense Ministry informs.

This week’s Russian and American flights with strategic bombers in the skies over and outside northern Europe happened simultaneously as exercise Northern Wind took place in northern Sweden. About 7,000 of the 10,000 participating soldiers came from Norway, Finland, USA and Great Britain.