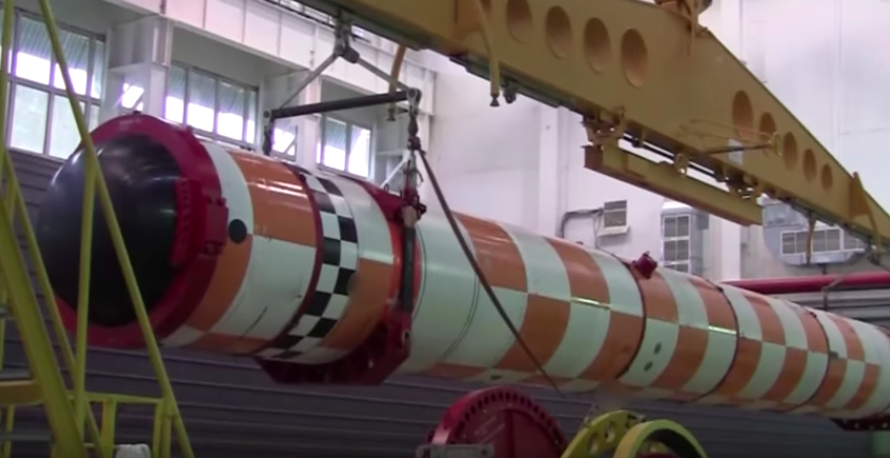 The Poseidon nuclear-powered drone. Screenshot of video posted by Russian Ministry of Defense

The world’s longest submarine ever built, the “Belgorod”, will soon be put on water from the yard in Severodvinsk. “Belgorod” is built on the design of an Oscar-II class sub, but with an embedded hull the submarine will actually be 184 meters. That is 11 meters longer than the Cold War giant Typhoon-class.

When the Barents Observer first reported about the existence of the up-coming submarine in 2017, it was in public sources believed it would be a research submarine to carry deep-sea diving equipment for military and civilian purposes on the Arctic shelf.

Now, it is clear the “Belgorod” will be carrying a way more terrifying cargo.

Kommersant, reporting from Shoigu’s Severodvinsk visit, writes the submarine will be the “first full-time carrier for the Poseidon underwater drone.”

Poseidon, a 70 feet underwater drone powered by a small nuclear reactor, is a drone that can cross entire oceans at depth down to 1,000 meters making it nearly impossible to intercept.

Tipped with a megatons-size thermonuclear warhead the drone will change global nuclear deterrence.

Kommersant and other Russian media, like TASS, report the launch of the “Belgorod” to take place before this summer. Then, one-year mooring-tests at the Sevmash yard will follow before the submarine can sail on active duty in 2020.

“Belgorod” will have a capacity to carry six Poseidon drones. Additionally, another submarine, the “Khabarovsk” is under construction at the same yard and is expected to be put on water in 2020 and be ready for combat missions in 2022.

Last month, Russia’s Defense Ministry posted a video of what was said to be the first test-launch on a Poseidon drone. The video shows the command room in the special purpose submarine B-90 “Sarov”.

It is not said where the test took place, in real-ocean or if the drone was launched in a simulated ocean-environment in a pool.

“Sarov” is based in Severodvinsk by the White Sea.

Submarine expert H I Sutton, running the blog Covert Shores, has for years studied open-source information about development of the Poseidon drone. A recent blog-post suggests the development of Poseidon has already been underway for nearly 20 years and countering this weapon will not be straightforward. Western planners will be forces to reconsider anti-submarine warfare and subsea sensor/weapons investment, the blog-post concludes.

The existence of the weapon was first officially announced by President Vladimir Putin in his annual state-of-the-nation speech in March 2018.

Kommersant writes it is likely Putin will be present in Severodvinsk when “Belgorod” is put on water.

Support independent, nonprofit journalism. For 16 years, the Barents Observer has provide serious, fact-based journalism and stories from the Barents region and the Arctic. Please help us continue to be a voice for freedom in the borderland to Russia. You can give a small support here.

Russia’s new military internet to be supported by Arctic cable