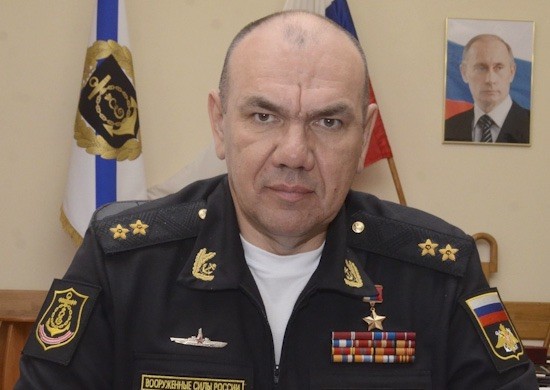 Aleksandr Moiseev served 29 years onboard nuclear submarines. Now, he is the new commander in charge of Russia’s most powerful fleet.
Read in Russian | Читать по-русски
By

The decree from President Vladimir Putin was signed on the 3rd of May. But the news was made public by the Armed Forces only six days later as thousands of Navy officers were marching in the streets on Victory Day May 9th.

The person who has headed the Northern Fleet for the past three years, Nikolay Yevmenov, is promoted to Head Commander of the Russian Navy. He takes over the leadership of one of most powerful military forces in the world. Yevmenov replaces Vladimir Korolev, who has been in charge of the Navy since 2016.

Aleksandr Moiseev comes from the post as commander of the Black Sea Fleet where he has served since May 2018. He has long experiences from the North. For more than two decades, he served on board submarines that criss-crossed the Arctic. He started up in 1988 as engineer on a sub and ended up as captain onboard one of the world’s most powerful nuclear submarines.

From 1994, he served on board the “K-18 Karelia ”, a Delta-IV submarine, and was awarded for his participation in the planting of a Russian flag on the North Pole.

In 1998, he headed the nuclear powered “K-407 Novomoskovsk ”, another Delta IV sub. He later became head the Northern Fleet’s 31st division, the powerful unit based in Zapadnaya Litsa on the Barents Sea coast. In 2008, was in charge of nuclear powered submarine K-44 when it made a transfer from the Northern to the Pacific Fleet under the polar ice in submerged position.

He is a man well liked by the President himself. In 2011, he was awarded by Vladimir Putin the medal for Hero of the Russian Federation, and subsequently became the deputy commander of the Northern Fleet and then leader of the submarine unit of that same fleet.

He, reportedly, even made it into local politics. According to Wikipedia, he was for a period a member of the local council in Aleksandrovsk, the closed naval town near Murmansk.