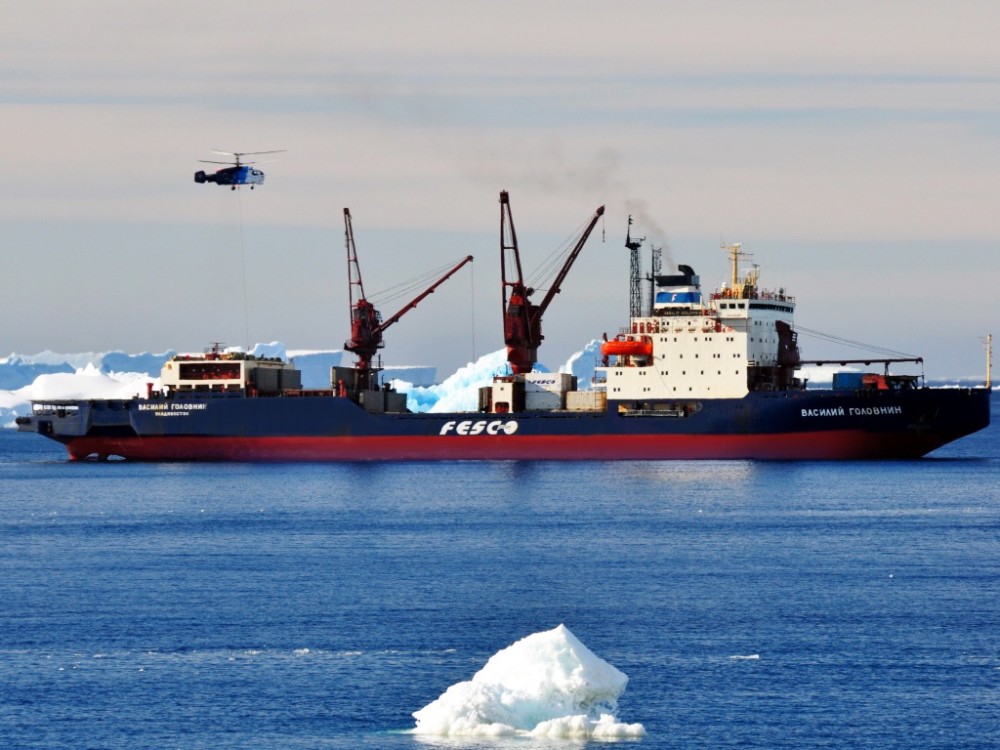 The «Vasily Golovnin» is one of few ships still in operation of the icebreaking vessels Project 10620. Photo: Fesco

The runway in Russia’s Arctic military base of Nagurskoye will strengthen Russia’s control over Arctic air space.
Read in Russian | Читать по-русски
By

It is located on Franz Josef Land at 80 degrees North and built to be able to handle all kinds of aircrafts, including the biggest in the country’s Air Force. This week, a ship delivered 9,000 tons of construction materials to the remote Arctic archipelago. That came after delivery of another 11,000 tons just few weeks ago.

Included in the cargo were concrete plates for the 2,500 meter long runway. Also electric cables were part of the shiploads, the Northern Fleet informs.

It was the cargo ship «Vitus Bering» that this week delivered the goods to the remote island, representatives of the Northern Fleet say. The ship belongs to an ice-breaking class of vessels called Project 10620 that was extensively used for Arctic shipping in the 1980s and 1990s. A total of five ships of the class were built. A modified vessel of the kind called Project 10621 was subsequently built. The latter includes the «Ivan Papanin» and the «Xue Long», the current Chinese icebreaker.

According to shipping data, the «Vitus Bering» was taken out of service in 2003 and the «Ivan Papanin» - in 2018. However, judging from the information from the Northern Fleet, the former has now been taken back into service and now operates for the Navy.

There is still up to one meter thick ice around major parts of the Franz Josef Land, and icebreaking capacities is a necessity for the deliveries. According to the Navy, the construction materials were put straight on the ice and subsequently brought to land.

Several ships delivered goods to the Nagurskoye also in fall 2018. In September, two ships brought several thousand tons of construction materials to the base. The cargo first of all included reinforced concrete plates and big bags with granulated materials for the airstrip, port authorities said.

In east Arctic archipelago of New Siberian Island, the Temp airbase is about 1800 meters long.

Russia is also building new and upgraded air bases along its Arctic coast, including in Tiksi, Vorkuta, Anadyr and Alykel.