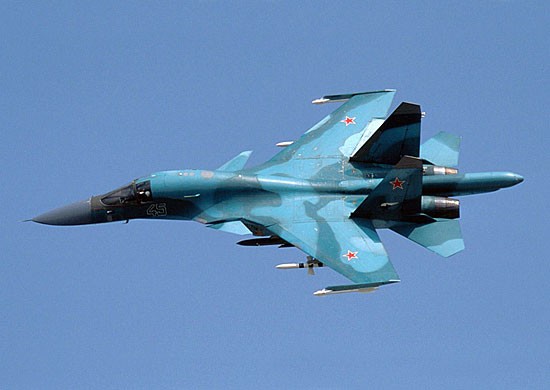 The Su-34 fighter jet will a central part of Russia's military buildup along the Northern Sea Route. Photo: mil.ru

A fleet of Su-34 fighter jets is to be deployed across the region. Their main base might be in the Kola Peninsula, not far from Finland and Norway.
Read in Russian | Читать по-русски
By

The Northern Sea Route needs better protection, Russia argues, and boosts its military presence in the region. New armament and military infrastructure has been made operational across the country’s vast Arctic coast. Radars and other radio-electronic equipment has been installed and missile systems and other advanced armament deployed. More is on its way.

It is the Northern Fleet that has been given the leading role in the development and a new strategic command, the Sever, was officially established in 2014. At its disposal are several new and updated bases, a string of new powers and some of the country’s most advanced armament.

A new Arctic air squadron is now in the making, also that to be managed by the Northern Fleet. The core in the new squadron will be the Su-34 («Fullback»), the multi-purpose fighter, newspaper Izvestia reports.

The new aircraft that was officially included in the Russian Air Force in 2014 has a range of up to 4,500 km without re-fuel and can consequently take practically the whole Northern Sea Route under efficient control, the military planners argue.

The Su-34 is believed to be able to operate autonomously over large areas and hit targets with high precision at distances up to 260 km. It will be equipped with the Kh-35U, a powerful turbojet supersonic cruise missile capable of eliminating major ships.

The new Arctic fleet of the Su-35 might be based in Monchegorsk, a military expert says to Izvestia. From before, the town located in the central part of the Kola Peninsula just about 100 km from neighboring countries Finland and Norway, houses a fleet of aircraft Su-24M and Su-24MP.

Several more airstrips across the Arctic will be at the disposal of the new squadron. Over the last years, Russia has invested in a number of new bases along the Arctic coast and in the Arctic archipelagos.

When fully developed, the Northern Fleet will have a well-developed network of military air bases in the region, stretching from the Kola Peninsula in the west to the Chukotka Peninsula in the east. The high Arctic bases includes also Nagurskoye in Franz Josef Land, Rogachevo in Novaya Zemlya, Temp in the New Siberian Islands and Tiksi on the Laptev Sea coast.

The air bases are supported by the best of Russia’s radars and surveillance early-warning systems. In May this year, the Northern Fleet reportedly confirmed that it has completed its new Center for Radio-Electronic Warfare. The center includes two Murmansk-BN systems, as well as the Krasukha and Divnomorye systems.

The powerful Murmansk-BN system has been deployed in Severomorsk, Kola Peninsula, and in Kamchatka, and is capable of covering the whole area of the Northern Sea Route. The range of the Murmansk-BN is 5,000 km and up to 8,000 km in good weather condition. In addition comes the Krasukha-2 and Krasukha-4 systems that have been deployed in new military bases in Novaya Zemlya, Severnaya Zemlya, New Siberian Islands and in Chukotka