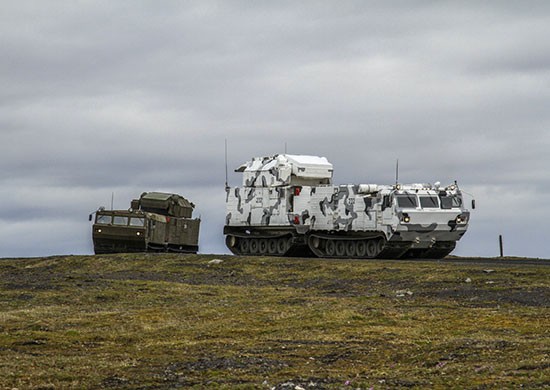 A battalion of short-range missile system Tor-M2DT has been deployed to garrisons located along the border to Norway and Finland.
Read in Russian | Читать по-русски
By

Following testing in Novaya Zemlya in July this year, the Russian Northern Fleet announces that it deploys several batteries of the country’s new Arctic missile weapon in the Pechenga area.

The new battalion has been included in the arsenal of the motorized rifle brigade of the Northern Fleet and deployed in one of the testing ranges in the Pechenga area, the Russian military informs.

The Pechenga valley is located in the Kola Peninsula along the borders to neighboring Norway and Finland. The distance from the local military bases to Norway is only about 10 km.

Less than 100 km away is located Vardø. the Norwegian town known for housing the Globus intelligence radar system.

According to the Northern Fleet, the purpose of the deployment of the Tor-M2DT is to secure air space control and defense.

The Tor-M2DT is a variant of the Tor system (SA-15 «Gauntlet») that first was introduced in the late 1980s. It is carried by DT-30PM all-terrain vehicles and is reportedly capable of detecting over 40 air targets, and track and engage up to four of them simultaneously at a range of up to 12 km and altitudes up to 10 km with its 16 missiles even on the move.

It is not the only new missile system that recently has been deployed in the border areas to Norway. In July it became clear that the Bal (NATO name SSC-6 or Sennight) coastal missile system had been moved from its permanent deployment location to the Sredny Peninsula on the coast to the Barents Sea.

It is believed that shooting with the Bal system will be made in course of this fall as part of a planned exercise by the Northern Fleet. The system is first of all made for targeting surface ships, but can also be applied against land targets.

Russia’s increased military activities in vicinity to Norwegian territory come shortly after the collapse of the more than 30 years old Intermediate-Range Nuclear Forces (INF) Treaty, which banned the United States and Russia from fielding land-based missiles with a range between 500 and 5,500 kilometres.