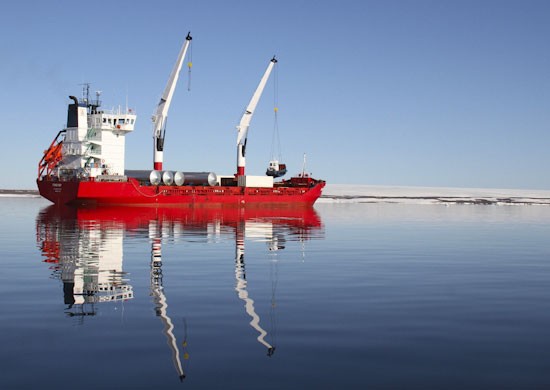 Ships deliver 175 units of weaponry to the new air defense base in Tiksi.
Read in Russian | Читать по-русски
By

Construction works have been going on hectically on the coast of the remote Laptev Sea as Russia’s Northern Fleet has strived to complete its newest Arctic base.

The establishment of the garrison in Tiksi was announced by then Northern Fleet Head Commander Nikolay Yevmenov in September 2018. In a meeting with regional authorities, Yevmenov promised that the base would be built in the record-short period of only six months.

By late January this year, Yevmenov informed that the base was «95 percent completed».

The complex includes 11 objects, among them a dormitory, an administrative building, a diesel-run power station, water and fuel reservoirs, cantina, garages and more. All the buildings are interconnected with each other, enabling easy passage between the facilities. Similar base complexes have previously been built in the archipelagos of Franz Josef Land and the New Siberian Islands.

Yevmenov in May this year rose to Head Commander of the whole Russian Navy.

New new base in Tiksi is now being equipped with weaponry.

The «Sevmorput» reportedly delivered 85 units of equipment to site. Later, the «Valery Vasiliev» put ashore another 90 units in addition to various construction materials and other goods.

The 135 meter long “Valeri Vasiliev” is owned and managed by Vladivostok-registered company AZSCO.

The new Tiksi garrison is reported to house 100 soldiers and be part of the Northern Fleet’s 45th Army. It will include anti-air forces, among them radio-technical and anti-aircraft units.