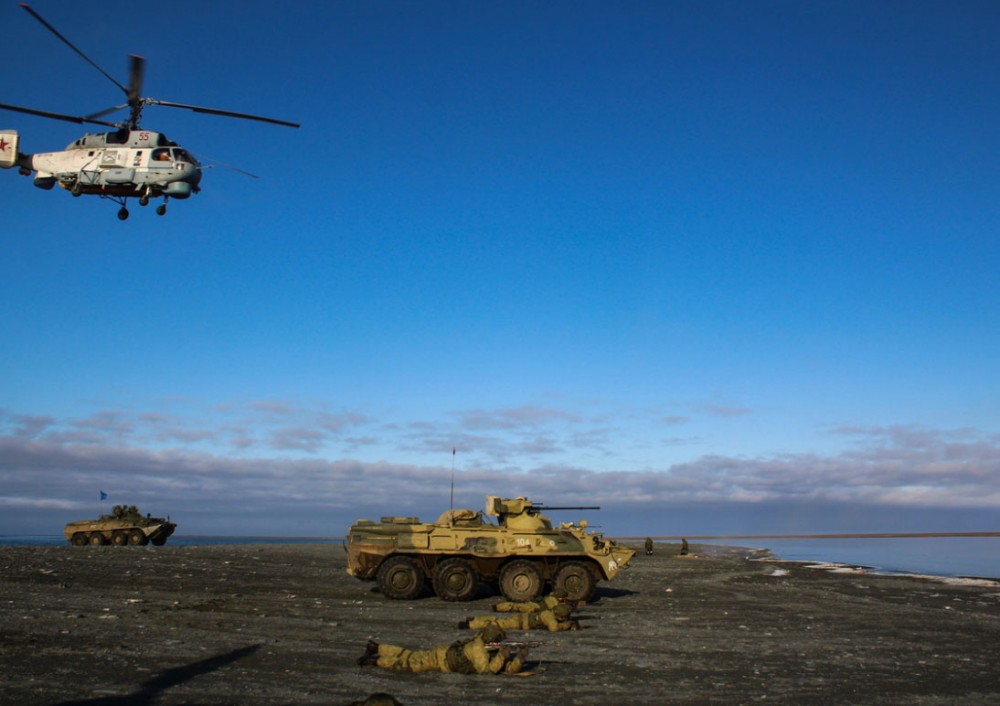 Troops from the Northern Fleet boast Russia’s reenforced presence in the High Arctic as they stage major military drills on the remote archipelago of Severnaya Zemlya.
Read in Russian | Читать по-русски
By

More than 500 soldiers were involved in the exercise that late last week took place on the Bolshevik island, the piece of land that separates the Kara Sea and Laptev Sea. The training came shortly before Russia launched this year’s biggest drills, the Tsentr-2019.

A team of armed divers first made it to the Arctic shore and was soon followed by two high-speed light boats and two Ka-27 helicopters. Big landing vessels «Aleksandr Otrakovsky» and «Kondopoga» subsequently put ashore 10 BTR-82A amphibious vehicles and troops.

It is reported to be the first time that an exercise of the kind is held in the 11,300 square kilometer big island located by the entrance to the Vilkitsky Strait, the waterway used by ships sailing on the Northern Sea Route.

The Bolshevik island is located at 78 degrees North and constitutes the southern part of archipelago Severnaya Zemlya.

The exercise was held as part of an ongoing major voyage of the Northern Fleet vessels. The ships set out from the Kola Peninsula in early August and several exercises have subsequently been organized, including in the Taymyr Peninsula.

Following the drills in the Bolshevik Island, the troops proceeded towards the island of Uyedineniya in the Kara Sea, the Russian military informs.

The military training in Severnaya Zemlya came just few days before the Russian Armed Forces kickstarted this year’s biggest exercise, the Tsentr-2019. Almost 130,000 troops are involved in the drills that take place in the Russian Central Military District. Involved are troops from China, India, Pakistan, Kazakhstan, Tajikistan, Uzbekistan and Kirgistan.

Included will be a «serious testing of the battle capacities of the Arctic troops,» a ministry source told Russian media.