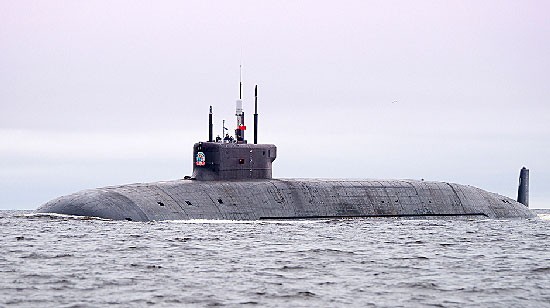 The «Knyaz Vladimir» has successfully fired torpedoes on underwater and surface targets in the White Sea, the Northern Fleet informs.
Read in Russian | Читать по-русски
By

«Knyaz Vladimir» is Russia’s new Borei-class sub, a nuclear-powered ballistic vessel that can carry up to 16 Bulava missiles.

Over the last weeks, it has been undergoing testing in northern waters and in late October test-fired its first Bulava. The submarine has now also tested its torpedoes.

A successful launch on an underwater target was conducted in the White Sea, the Navy informed on the 8th November. The torpedo did not carry a warhead. The launch came after torpedo test shooting on surface targets.

The testing comes ahead of the official transfer of the submarine into the Northern Fleet.

Commander of the Russian Northern Fleet, Vice-Admiral Aleksandr Moiseev has previously told TASS that “Knyaz Vladimir” will be accepted by the navy after all weapons tests are completed. The transfer is likely to happen in late December.

“Knyaz Vladimir” is the Russian Navy’s fourth Borei-class submarine, but the first of the upgraded version, named Borei-A, which is sailing more silently than its sister ships.

Two others, the “Aleksandr Nevsky” and “Vladimir Monomakh” are sailing for the Pacific Fleet.

The “Knyaz Vladimir” is far from the only Russian submarine that now is engaged in training in the Barents Sea. In the first days of November, the «Nizhny Novgorod» and the «Pskov» were centerpieces in a so-called «underwater duel» that included hide-and-seek and combat maneuvering.

The war games between the two subs included simulated launches with torpedoes, as well as real torpedo shooting without warheads, the Northern Fleet informs.