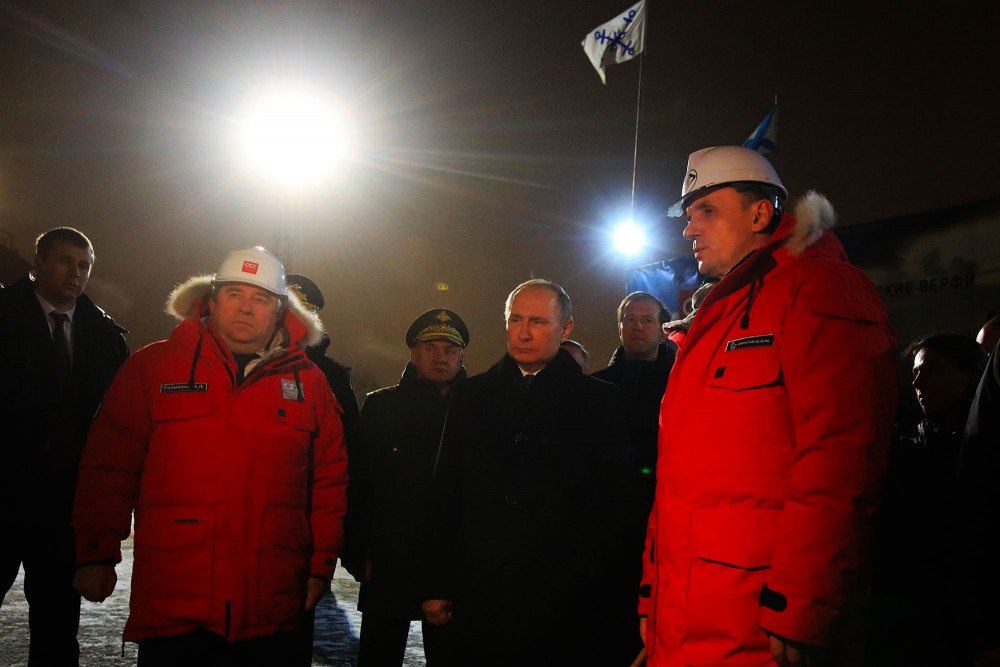 Putin and top aides during visit to the Admiralty Yard. Photo: admship.ru

President Putin assembles his top military aides to discuss the development of the Navy and Northern Fleet.
Read in Russian | Читать по-русски
By

As the year draws towards an end, the President again sits down with the top leaders of his military and military industrial complex.

In Tuesday’s meeting in Sochi, Putin reiterated his key mantra; Russian national security is threatened by the build-up of NATO infrastructure along its borders and Russia must give the highest possible attention to the technical re-equipment of its armed forces and Navy.

According to the President, the Russian naval forces have in 2019 been added a total of 23 new surface vessels, including service and supply ships, two new submarines, three aircrafts, four coastal missile complexes and 400 units of various missile and torpedo weapons.

In addition come 480 different kinds of new kinds of armament and equipment, the Kremlin informs.

The Northern Fleet constitutes a crucial part of the Russian armed forces and Putin made clear that the country’s strategic nuclear forces are now being re-equipped with modern nuclear submarine cruisers of the Borey class equipped with the Bulava ballistic missiles.

The Borey-A class sub «Knyaz Vladimir» will be handed over to the Navy in the course of December and another four submarines of the class are under construction, Putin underlined.

In addition to the nuclear forces, Russia is developing new conventional forces, including the high-precision and long-range Kalibr missile. The number of missiles of the kind will be doubles by 2023.

Moscow is also working to empower its fleets on the world seas and have a total of nine surface vessels with long-distance capacities under construction.

Thee meeting in Sochi comes shortly after Putin’s visit to the Admiralty Yard in St.Petersburg where he took part in a construction start ceremony for ice-class patrol ship «Nikolay Zubov.»

The ship, which is part of new Project 23550, will be able to operated in remote Arctic waters with ice thickness up to 1,5 meters. The «Nikolay Zubov» is the second ship of a brand new class of Arctic ships that can take on a range of new patrol responsibilities along Russia’s vast northern coast, the yard informs.

During that same visit, Putin also paid a visit to the nearby Baltic Yard where Russia’s new nuclear icebreakers are being built.

The development of the Arctic and the Northern Sea Route is of big importance for Russia, Putin underlined.

«Today, big and important challenges are ahead of us and their efficient resolution lean on the Baltic Fleet’s current construction of three icebreakers, as well as the development of new generations of ships,» he said, the Russian Marine Board informs.