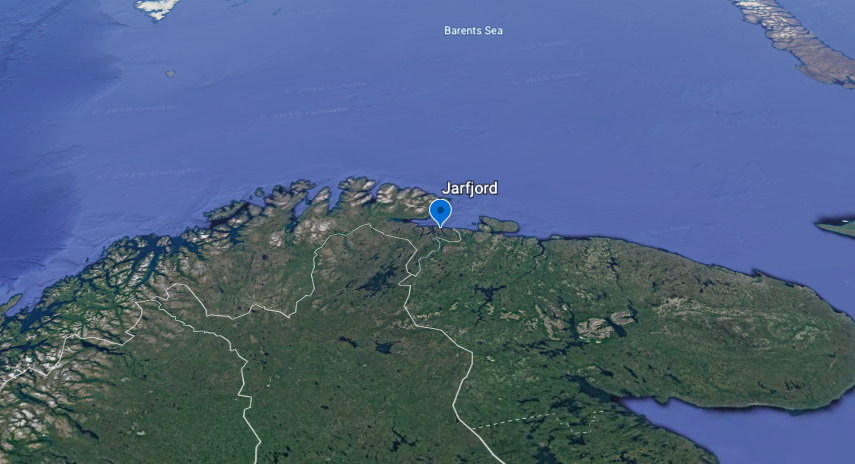 Skipshamn in Jarfjord is about 25 nautical miles from Norway's maritime border to Russia. Map: Google Earth

A former officer from the Headquarters of the Armed Forces in Northern Norway told about the surfacing submarine in a TV documentary by NRK about the Cold War.
Read in Russian | Читать по-русски
By

The Soviet Northern Fleet’s secret underwater mission deep into Jarfjord near Kirkenes happened the same autumn as Mikhail Gorbachev was announced winner of the Nobel Peace Price by the committee in Oslo.

Broadcasted on Sunday evening, the NRK documentary told a story never known to public before. Link to the program here (not possible to watch from outside Norway).

Skipshavn is a small bay on the western shores of Jarfjord, east of Kirkenes on Norway’s Barents Sea coast. By sailing, the bay is about 25 nautical miles from the maritime border to Russia.

After receiving reports about suspicious activities in the area in June 1990, military divers first discovered tracks on the seafloor. Coming back a few months later for more thorough investigation, the divers could see new tracks that were not there on the previous dives.

We then decided to put the bay under surveillance, said former officer on duty with the military command headquarters of northern Norway, Tore Lasse Moen, interviewed in the documentary by NRK.

A team of four from the Navy Special Operation Command was sent on a top secret mission to monitor the remote located bay. This was late autumn 1990 and the group stayed in the area for a few months. Winter came, and then, on November 20th, one of the soldiers could with his binoculars suddenly see air-bobbles in the water.

A mini-submarine came to surfaced and stayed there for a few minutes before silently diving and disappeared in the dark.

The mini-submarine had no sail and was estimated to be 7 to 8 meters long and had floting pontoons on each side. Norwegian military experts belived the submarine could be rather similar to the rescue- and seafloor mission submarines operated by the Soviet Northern Fleet. Such mini-sub is said to exist also with tracks to move along the seafloor.

The mini-subs of the Project 1837 and similar, though, have a small sail, while other special operations mini-subs have a flat top. Like those believed to have been inside Swedish waters in recent years. 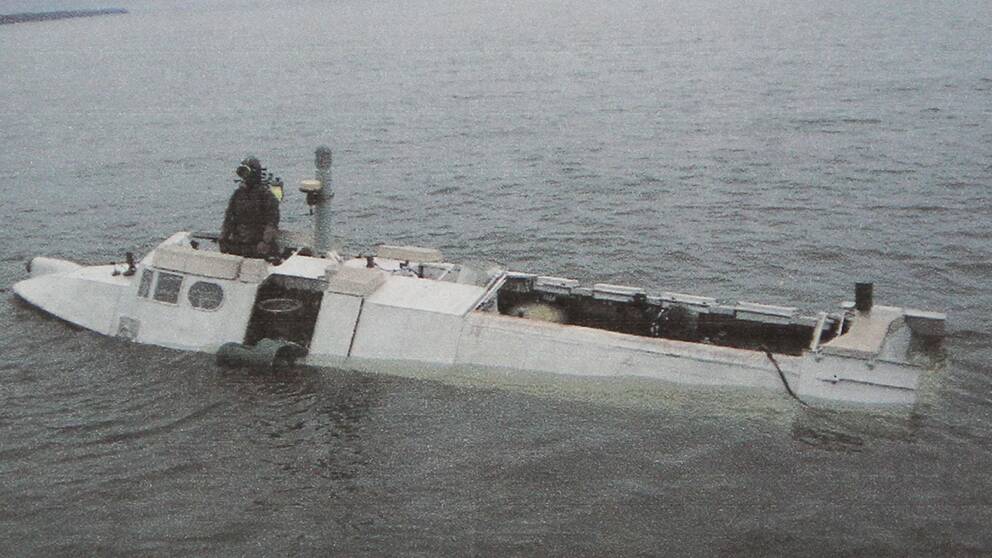 Another special mission mini-submarine that could look like it has pontoons on each side if it is just partly over the surface is the Piranha (Losos-class by NATO-name). This submarine was dedicated for Spetsnaz operations and capable of delivering 6 divers.

Swedish author and expert on military history, Lars Gyllenhaal, writes in his blog about the submarine and how it was used. His reporting is largely based on Russian sources.

The Norwegian Special Forces team that discoered the mini-submarine in Jarfjord in Finnmark was led by Trond Bolle, later a well-known commando of Marinejergerkommandoen (Navy Special Operations Command) who was killed by a roadside bomb in Afghanistan in 2010.

Bolle is one of few Norwegian soldiers awarded (posthumously) the War Cross with Sword.

At the time, Soviet special missions subs were attached to what today is known as Russia’s Main Directorate for Deep Sea Research, based in Olenya Bay northwest of Murmansk on the Kola Peninsula.

The fleet of special purpose submarines in the late days of the Soviet Union consisted of both mini-submarines that could serve as rescue subs, with a hatch where divers could leave and enter, as well as small submarines with tracks to move on the seafloor.

Such mini-subs, though, can’t sail for a long distance by themself. It can therefor be assumed that a mother ship likely brought the sub to near the Norwegian, Soviet maritime border in the Varanger fjord, from where the small craft continued the voyage into Jarfjord independently.

Tore Lasse Moen said they had two theories about what could be the aim of the mission if it was Russian special operations forces, the Spetsnaz: It could be a training to enter into another country’s territory, or it could be part of a mapping of a location where a possible future operation could happen.

Norway has several military installations in the area around the Varanger fjord.

Tore Lasse Moen said the military command and ministry in Oslo were informed about the Soviet Navy’s serious violation of Norwegian waters up north. The Soviet mini-sub was never seen in the area after that.

The incident in Jarfjord was, however, not the only discovery of tracks on the seafloor. The NRK documentary also featured an interview with Jon Røkenes, a diver in Alta that could tell about video-recordings he made just outside the harbor on February 21st, 1991.

Also Røkenes has a background from the Navy Special Operations Command. After showing the video recordings of the tracks on the seafloor to the military command headquarters, he was told not to talk about what he had seen.

NRK Finnmark has posted the video of the seafloor crawler tracks and the interview with Jon Røkenes.

The information now made public in Norway is somewhat similar to stories from Sweden.

H I Sutton, a submarine expert publishing the blog Covert Shores, tells about mysterious tracks on the seafloor just next to Kallax airport in Luleå, discovered in 1983. Kallax is Sweden’s northernmost air base for fighter jets.

Also in southern Sweden, tracks and footprints from subsea vehicles have been discovered on the seafloor. Also in recent years.

The Barents Observer depends on donations from our readers. Please help us continue to be a voice for free reporting in the borderland to Russia. You can give a small support here.