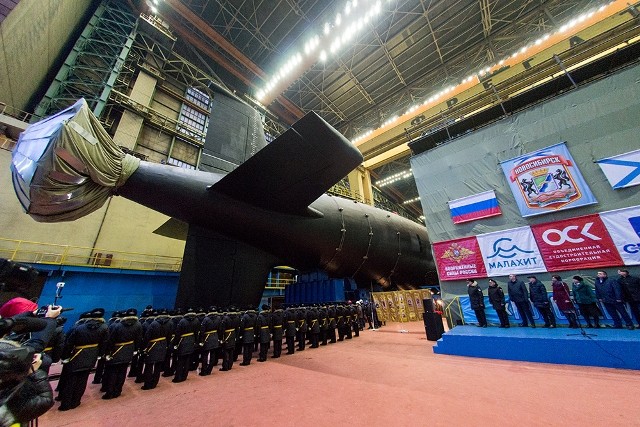 "Novosibirsk" is the second serial production submarine of the Yasen-M class. Here from the ceremony at Sevmash on December 25th. Photo: Sevmash

After the two previous 4th generation multi-purpose submarines experienced long delays in construction, Russia now seems to have gain speed at the shipyard in Severodvinsk.
Read in Russian | Читать по-русски
By

“Novosibirsk”, a Yasen-M class nuclear-powered sub, was launched and put on water on December 25th in an official ceremony, Semash yard informs.

The submarine is the second of the serial production of the class, following “Kazan” that is currently on sea trials, testing her weapons and navigation skills.

The prototype of the class, “Severodvinsk” started to sail in 2013, but was not announced combat ready with the Northern Fleet before 2016, 23 years after her construction started.

While it took more than 20 years from start of construction to operative service for the “Severodvinsk” and 11 years for the “Kazan”, the “Novosibirsk” is likely to show a more normal construction time for the class.

“Novosibirsk” was laid down in July 2013 and is expected to enter service by the end of next 2020.

There are currently four additional Yasen-M class submarines under construction at Sevmash yard; the “Krasnoyarsk”, “Arkhangelsk”, “Perm” and “Ulyanovsk”. Contracts for two more, yet to be named, are signed and their construction is said to start in mid-2020.

Yasen-M class will be the most powerful multipurpose submarines in the Russian navy, armed with 32 cruise missiles, either the Kalibr or Onyx, additional to torpedoes.