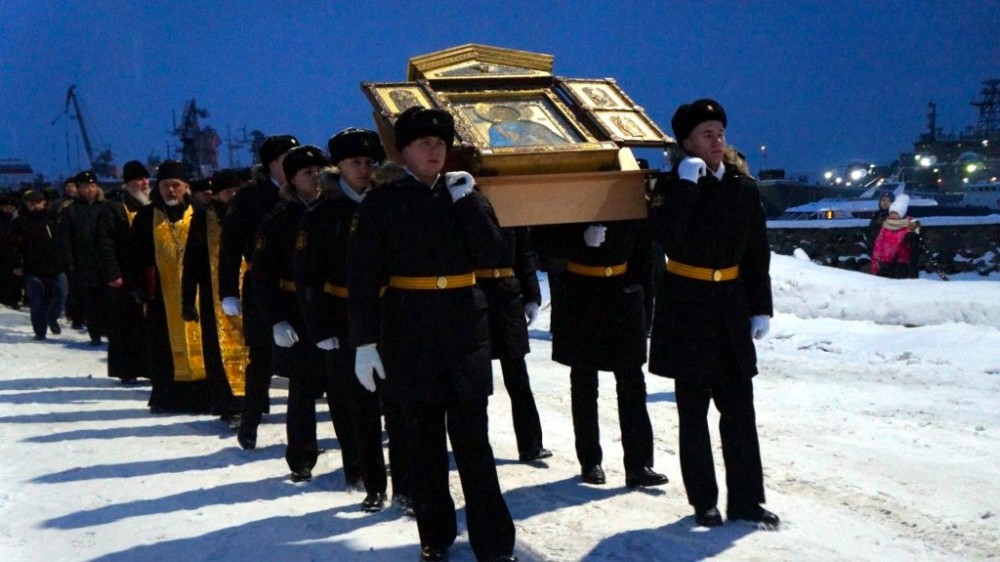 The church icon that serves as patron for Russia’s Navy sailors is visiting the Northern Fleet base towns in the Kola Peninsula.
Read in Russian | Читать по-русски
By

The sacred religious symbol was on the 21st December flown into the Northern Fleet headquarters of Severomorsk and subsequently taken around in a church procession among the military vessels on the port side.

The icon depicts Andrew the Apostle and is the patron of the Russian Navy. It is on a grand tour in the country’s five fleets before it will be installed in the military cathedral currently under construction in Moscow.

«Today’s event helps raise the moral spirits of the Northern Fleet warriors, as well as the town inhabitants, and is an example of the Russian Orthodox Church’ attention to the protectors of the motherland,» fleet head commander Aleksandr Moiseev said in an address published by the local diocese.

The icon was on the 30th December moved to Murmansk and will in the course of January be on display in the region’s military towns of Gadzhiev, Vidyaevo, Zaozersk and Luostary. It will subsequently be brought to the city of Severodvinsk in Arkhangelsk Oblast and then to the Russian east coast and the Pacific Fleet, the Northern Fleet informs.

By early May, the icon will be installed in the grand military cathedral in Patriot Park outside Moscow. The cathedral will be sanctified on the 9th May in connection with the 75 years anniversary of the Second World War.

The camouflage-colored church building will be 95 meters high and will have a huge 19,45 diameter cupola. It will be part of a huge park complex that includes memorial installations from the 2WW.

The cathedral is built with heavy 2WW symbolics. Thus, the 19,45 diameter cupola is connected with the year 1945 while the second tiny smaller cupola is 14,18 diameter big, which relates to the 1418 days that the war lasted, the project website informs.