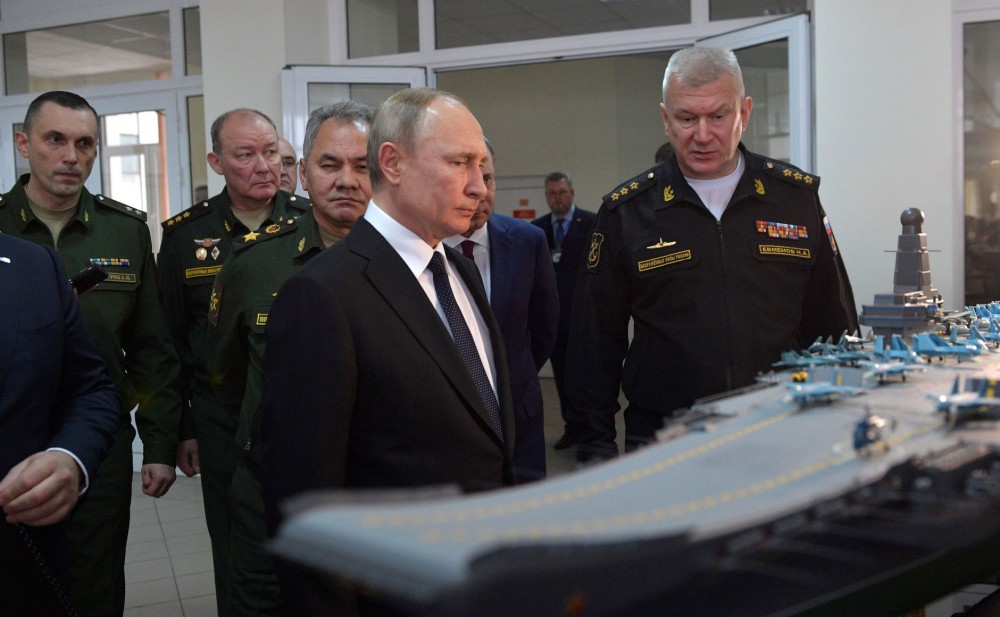 As the country’s one and only vessel of the kind lies damaged by accident and fire at port in Murmansk, the President puts his eyes on a brand new project.
Read in Russian | Читать по-русски
By

The new year opened with major military attention for the Russian state leader. During his visit to Sevastopol, the Crimean naval city, Putin first attended a major naval exercise that included vessels from both the Black Sea and Northern Fleets. More than 50 ships took part, among them the «Marshal Ustinov» and «Vice-Admiral Kulakov» from the Northern Fleet.

From the bridge of «Marshal Ustinov», Putin watched how the involved naval forces fired Kalibr missiles from both surface and underwater position and MiG-31K aircrafts fired Kinzhals, the nuclear-capable air-launched ballistic missile. Also missiles type Moskit and Utyes were fired during the exercise, the Kremlin informs.

Later that same day, Putin took a look at new naval vessels planned built by the Russian Armed Forces. According to the Kremlin, the expedition especially focused on new aircraft carrying vessels.

The Russian Navy has over the last years been significantly strengthened with new capabilities. However, the country only has one aircraft carrier, the «Admiral Kuznetsov». And that ship is in an increasingly dire condition. In October 2018, the ship got damages on deck as the floating dock that was working with the vessel sunk to the bottom of the Kola Bay. And in December 2019, a fire raged on board, damaging up to 600 m2 of the ship interior.

A new aircraft carrier is indeed on the wishing list of the Russian Navy. But needed development and construction costs might exceed the capabilities even of the country’s military budget.

The new ship is called «Lamantin» (project 11430E) and has been designed by the Nevskoye Design Bureau in St.Petersburg. It is 350 meter long and has a deadweight of up to 90,000 tons. It can handle up to 60 aircrafts and has a crew of 2800 men, as well as 800 personnel engaged in the air wing.

A competing aircraft carrier is called the «Shtorm» (project 23000) and is designed by the Krylov State Center. The «Shtorm» is 330 meter long and can carry up to 90 vessels, the Topwar news agency informs.

It is believed to take up to 12 years to develop and build a new aircraft carrier.

The visit of the president to Sevastopol was completed with a meeting with the country’s top naval leaders.

«The Navy was always and will always be the most important component in national defense and security, [and] in the 21st century we have to preserve and strengthen the status of our country as one of the leading naval powers,» Putin underlined in the meeting.

In the course of 2020, more than 70 percent of all armament and equipment of the Navy will be based on new modern technology, he made clear.