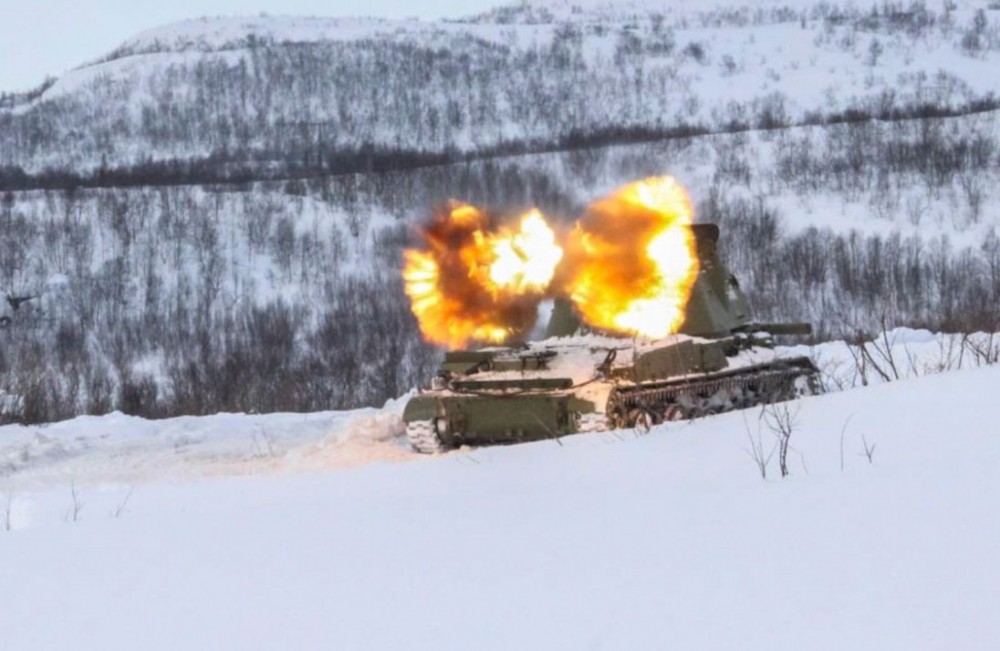 More than 1,000 men from Russia's Northern Fleet engage in combat training along the border to Norway
Read in Russian | Читать по-русски
By

It not uncommon that the Northern Fleet holds exercises in the Pechenga area in early spring. But this year’s Russian drills along Norway’s NATO border are also seen as a response to the allied Cold Response in northern Norway.

However, while the western soldiers now end their war games ahead of schedule because of the coronavirus, the Russian troops are unlikely to make reciprocal measures.

Involved in the Russian drills are more than thousand troops and 220 pieces of machinery, including multiple rocket launchers Grad, self-propelled howitzers Gvozdika and Akatsiya, as well as guided anti-tank missiles, the Northern Fleet informs.

The training scenario includes support fire with heavy howitzers to a counter attack against enemy forces and subsequent “destruction of the enemy.”

The artillery fired at targets up to 15 km away, the military representatives say.

The training takes place on the shooting ranges in the Pechenga area, only few kilometers from the border to Norway. It is the 200rd motorized infantry brigade that constitutes the centerpiece in the training.

The troops are based in Pechenga area. Nearby is located the 61st Naval infantry brigade in Sputnik and the 80th Independent Motorized Rifle Brigade in Alakurtti.

The Northern Fleet has kept a close eye on NATO’s Cold Response exercise in northern Norway. Both ships and aircraft have exposed their presence in areas adjacent to the Norwegian training grounds. That includes the two Tu-142s and one MiG-31 that on Saturday flew over the Norwegian and North Sea.