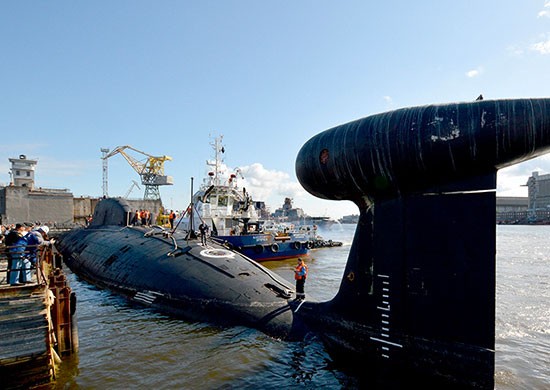 The K-157 "Vepr" is first of five upgraded Akula-class subs that are about to return to active duty in the Barents Sea.
Read in Russian | Читать по-русски
By

The K-157 “Vepr” will enter service in the Northern Fleet in the course of April, Head Navy Commander Nikolay Yevmenov told Russian media.

The 114 meter long sub was completed and included in the Russian fleet in 1995. Three years later, the ship became known for an emergency situation with a 19-year serviceman that shot eight of his fellow sailers and barricaded himself in the ship’s torpedo compartment. He was ultimately killed by a small bomb planted by the FSB inside the telephone used for negotiations, historical notes read.

The K-157 is the first in a series of repaired and modernized nuclear powered Akula-II subs that now are ready for operations, newspaper Rossiiskaya Gazeta reports.

Soon, also the “Bratsk”, “Volk”, “Leopard” and “Samara” will follow. The ships will all be able to carry the Kalibr cruise missiles.

While the “Vepr” is an Akula-II class vessel (project 971U), the other four ships belong to the slightly older class Akula-1 (project 971). The vessels could now ultmately sail for the Northern Fleet for another 25-30 years.

According to Nikolay Yevmenov, the Akula subs are not the only vessels that are in the process of modernization. Also submarines of the class 667BDRM “Delfin” (Delta-IV) and the 949 class (Oscar-II) are to be upgraded.

“We do not have the right to say good-bye to ships that have such solid reserves, and we will continue repair at various levels and modernization of nuclear vessels project 667BDRM, 971, 949,” Yevmenov said.

He added that the modernized vessels of Project 949 “Antey” will be able to carry the Kalibr, Oniks and Tsirkon missiles.

At the moment, one 667BDRM (Delta-IV) is believed to undergo modernization at the Zvezdochka yard in Arkhangelsk, while two 949a (Oscar-II) subs are upgraded at the Zvezda yard in the Russian Far East.