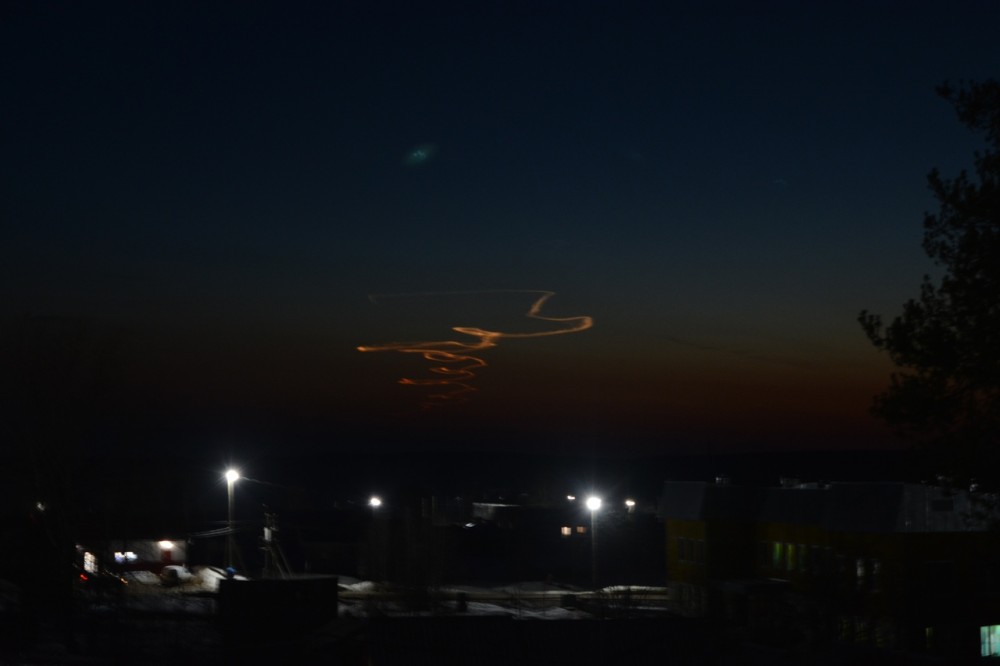 A spectacular trace of the missile could be seen in the skies above the Komi Republic. Photo courtesy of Komiinform.ru

The top-secret missile was most likely what locals in two remote villages in the Russian north captured on camera on Wednesday.
Read in Russian | Читать по-русски
By

Observers started to speculate about a possible test of the anti-satellite missile last weekend when Russia issued a NOTAM (Notice to Airmen) with danger areas east of Cap Kanin in the eastern Barents Sea and east of the Severnaya Zemlya archipelago in the Laptev Sea. The closed-off areas are typical for a two-staged missile to fall down after separating following a launch from Plesetsk cosmodrome in the Arkhangelsk region.

Although not publicly commented on by Russian military authorities or national media, the test is now confirmed as the US Space Command has issued a statement calling the test a threat to U.S. and allied space systems.

Meanwhile, locals in northern Russia were wondering what lighted the skies last night. Some thought it was the condensation trail from an aircraft, although very twisting.

Others speculated it could be a UFO.

The photos published by news agency Komiinform are taken from the two villages Ust-Vym and Zheshart, some 500 kilometers east of Plesetsk. Both villages are located on the banks of the Vychegda River north of Syktyvkar, the regional capital of the Komi Republic.

For locals in settlements in the Russian north, traces after missiles and rockets launched from Plesetsk are a normal sight. What is not normal is the total lack of media reports or public statements, either it is from the Defense Ministry or the Roscosmos, the state corporation for space activities.

Russia’s anti-satellite weapon system is also previously tested and is known under the name sistema A-235 / RTTS-181M Nudol. It is also aimed to be an anti-ballistic missile system.

“The United States is ready and committed to deterring aggression and defending the Nation, our allies and U.S. interests from hostile acts in space,” General Raymound said.

It is unclear if the missile launch from Plesetsk on Apri 15 actually hit any space objects, like an old Russian satellite.

The United States in February raised the awareness about Russia’s on-orbit testing, with two named satellites, the COSMOS 2542 and COSMOS 2543. According to the Americans, the two satellites have “exhibited characteristics of a space weapon.”

Conducted maneuvers near a U.S. satellite, the Space Command interpreted the two Russian military satellites as “irresponsible and potentially threatening.”

According to the blog site Russian strategic nuclear forces, published by security and nuclear disarmament expert Pavel Podvig, the Cosmos-2542 satellite in December last year released what appeared to be an inspector satellite, the Cosmos-2543, which then was tailing a U.S. spy satellite.

“This test is further proof of Russia’s hypocritical advocacy of outer space arms control proposals designed to restrict the capabilities of the United States while clearly having no intention of halting their counterspace weapons programs.”

“Space is critical to all nations and our way of life. The demands on space systems continue in this time of crisis where global logistics, transportation and communication are key to defeating the COVID-19 pandemic.” Raymound added.