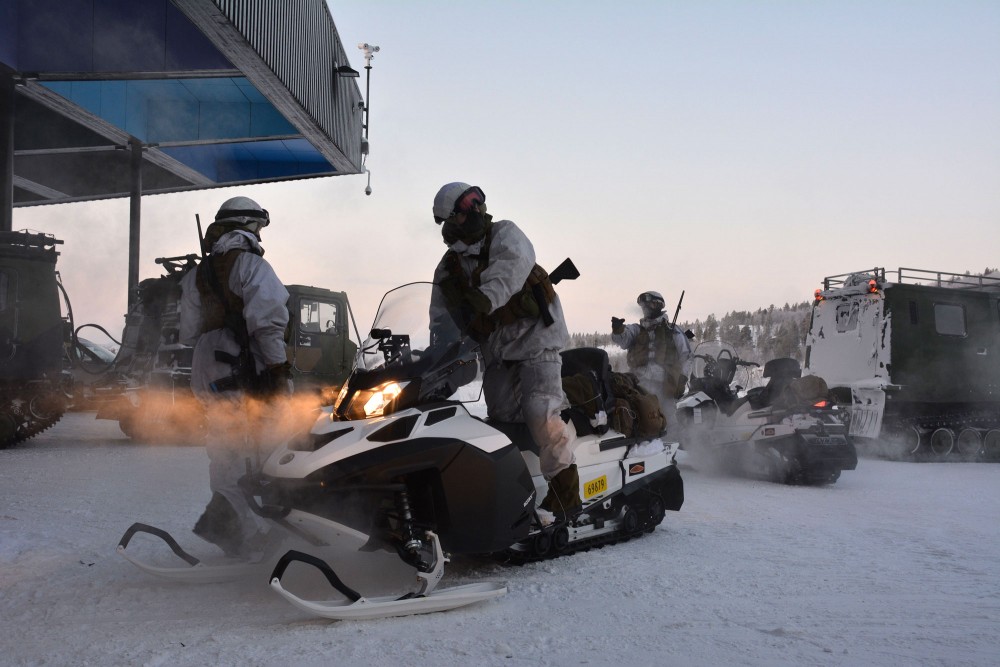 There are forces that want to weaken unity in Norway, as well as between western countries, Prime Minister Erna Solberg underlined as she on Friday presented her government's new long-term plan for the Armed Forces.
Read in Russian | Читать по-русски
By

“As we have seen over the past weeks, a crisis can come at any time and in a way we did not anticipate,” Solberg said in her joint press conference with Minister of Defense Frank Bakke-Jensen.

The two government representatives stood at safe distance from each other. So did also the journalists in the room.

According to Solberg, the corona crisis has shown great unity in her country. “It has shown that Norway stands together in the protection of its democracy, rule of law and human dignity,” she underlined.

The Prime Minister highlighted that these values are under pressure and that outside forces actively seek to undermine unity.

“These are countries where the authorities do not see the value of neither democracy, rule of law, nor the fact that people have undisputed rights,” she underlined.

“Over the last years, these forces have become increasingly visible and gained more influence,” Solberg added.

The 123-page defense plan that was put on the table during the press conference mentions Russia a total of 58 times and China 52 times. Both countries are seen as main threats against the Nordic country.

According to the document, Russia now poses a bigger national security challenge than in several decades.

“The potential of the Russian military power has been significantly changed in few years, and the country’s behavior is increasingly assertive and venturous. Russian authorities are willing to apply a wide specter of military and non-military means to fulfill their goals,” the authors of the plan write.

However, despite the growing tensions, Norway continues to promote a policy of deterrence and rapprochement, and agreement over the establishment of a new bilateral communication channel was reached in 2019.

According to Defense Minister Frank Bakke-Jensen, the communication channel between Oslo and Moscow will contribute to dialogue and prevention of misunderstandings connected to military activity.

Norway’s location in the North near Russia’s strategically important Kola Peninsula makes it a geopolitically key player in international military affairs. Over the last years, a rapid Russian military buildup has been seen in immediate vicinity to Norwegian land and maritime borders.

Presence in the region is now increasingly important, Oslo argues.

“If Norway does not have a regular and predictable presence in the North, a space could open for allies or others to fill, the Norwegian Defense Ministry says. “Such a development could have negative consequences for stability and Norway might lose influence on the security development in its own neighborhood.”

The country now says it needs a significant strengthening of its military. And it is increasingly dependent on allied cooperation.

The long-term plan for the Norwegian Armed Forces covers the period between 2020-2024 and includes a strengthening of all military branches.

A total of 16,5 billion Norwegian kroner (€1.46 biillion) will be added to the Armed Forces over the next eight years.

A key parts of investments will be focused on the north of the country, where the Brigade North will be strengthened with a new battalion and the Finnmark Land Defense added fire power.

The Army will get new armored combat vehicles from 2025, as well as long-range precision weapons. In addition, a new mobile unit for Chemical, Biological, Radioactive, Nuclear (CBRN) defense will be established.

The Navy will start planning of a new vessel structure that ultimately will lead to the acquisition of new ships in cooperation with allies. Four new submarines will be included in the naval forces in the late 2020s and the country’s fleet of four frigates is to be “significantly upgraded”. In addition comes and extension of the service life of the Skjold-class corvettes.

Meanwhile, the “KNM Helge Ingstad”, the frigate that in 2018 sunk after a collision with an oil tanker off the coast of western Norway, will not be replaced, the Ministry of Defense has decided.

The country’s Coast Guard fleet will in the period 2021-2025 be strengthened with three new ships.

The Norwegian Air Force now possesses a total of 22 new F-35 fighter jets and several more will over the next years be included in the force. In addition, five new P-8 Poseidon air surveillance aircraft will soon replace the country’s existing Orion aircraft.

Norway is also in the process of significantly strengthening its air defense capabilities.

Cruise missiles today poses the most challenging threats to the air defense of the country, the report underlines, and government therefore intends to upgrade its existing NASAMS system with modern censors, and also incorporate a complimentary system with shorter range.

In addition comes the acquisition of a new long-range air defense system that is to help defend the country against short-range ballistic missiles.

According to the defense plan, Norway today faces a serious national security situation.

“Not since the end of the Cold War has Norway and our allies faced such a magnitude of contemporary security challenges, against the state, society and people.”

“And in this security landscape there is more direct competition and rivalry that quickly could develop Ito confrontation,” the report reads.