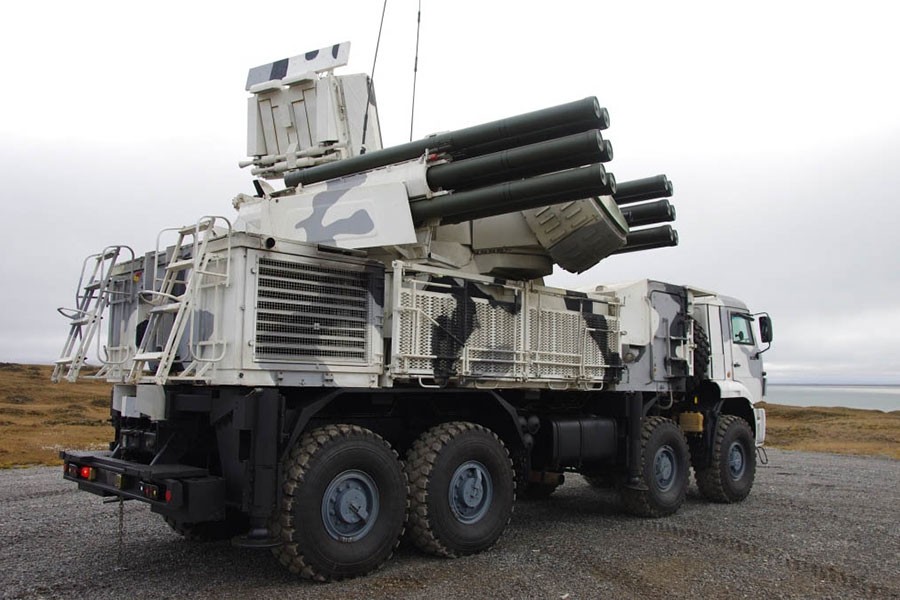 The Pantsir-S1 air defense vehicle is designed to take down tactical aircraft and small unmanned aerial vehicles (UAVs). The Northern Fleet';s version of the weapon is painted camouflage-white for winter operations. Photo: Press service of the Northern Fleet

The weapons system to be exercised, Pantsir-S1, is believed to have shot down a U.S. military drone in Libya last November.
Read in Russian | Читать по-русски
By

It is the press service of Russia’s Northern Fleet that informs about the Pantsir-S1 anti-aircraft guns- and missile systems now on the move towards a Shary shooting range in the Pechenga region, about 20 kilometers from the border to Norway.

The exercise will include live firing at both air and ground targets. Some targets will be UAVs, while others will be models of vehicles on the ground, the information reads.

Pantsir-S1 belongs to the Northern Fleet’s anti-aircraft missile and artillery battalion, aimed to protect the naval nuclear weapons facilities, including the bases for ballistic missile and multi-purpose submarines along the coast to the Barents Sea, from the Norwegian border in the west to the inlet of the Kola Bay in the east.

Drones play an increasingly important role in modern warfare. According to an overview by the portal FlightGlobal, 24 drones have been lost in conflict zones over the first six months of 2020. That is one more than in the 5-years period from 2015 to 2019 when 23 drones were lost.

A U.S. military MQ-9 Reaper drone that was lost near Libya’s capital last November is believed to have been shot down by Russian private military companies using a «sophisticated Russian air defense system,» according to a testimony to Congress by General Stephen Townsend, chief of the U.S forces in Africa.

The Pantsir-S1 is apparently to blame for the downing of many drones in the Libyan civil war.

This week, the Northern Fleet also completed combat training with the Pantsir-S1 at its Arctic base on Kotelny Island in the Laptev Sea. The Northern Fleet has a special Arctic version of the anti-missile system.