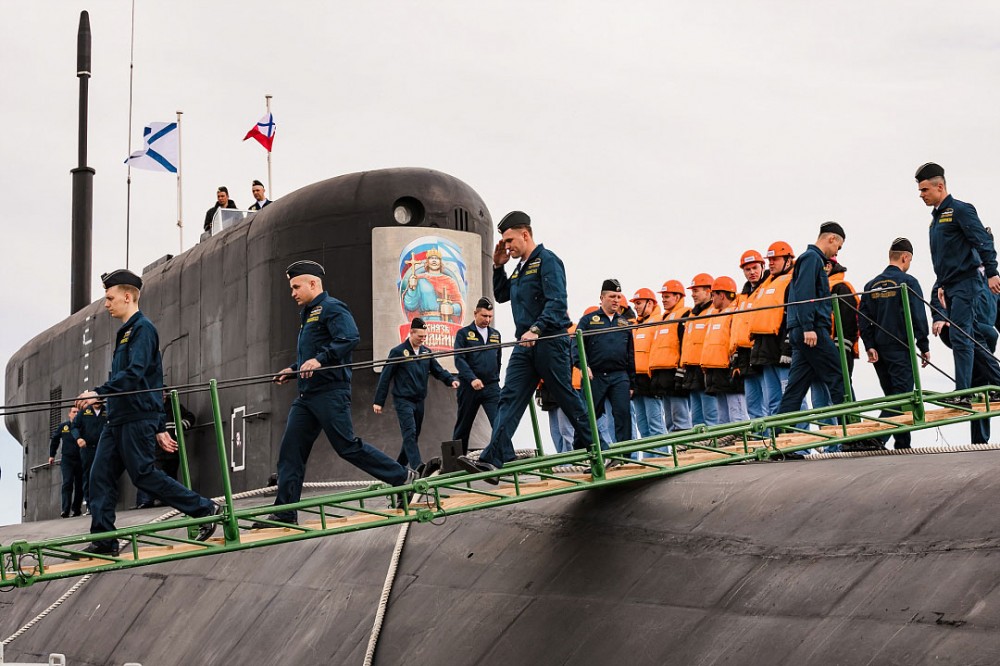 The "Knyaz Vladimir" arrives in Gadzhievo in the Kola Peninsula.
Read in Russian | Читать по-русски
By

Three weeks after it was officially handed over to the Northern Fleet, ballistic missile submarine “Knyaz Vladimir” arrives in its home base of Gadzhievo.

On the port side were delegations headed by Northern Fleet Head Commander Aleksandr Moiseev and regional Governor Andrey Chibis.

“The defense capacity of our country are under solid protection […] The super-modern underwater cruiser will undoubtedly strengthen global security and I very much hope that its weapons will never be applied,” Governor Chibis said in the ceremony.

The vessel has unique equipment and the most modern weapons, Head Commander Moiseev underlined. The crew will now in the shortest possible time start its combat duties, he explained.

A slide show of photos is provided by the Murmansk government.

The delivery of the submarine has been significantly delayed. It was originally to be completed by shipyard Sevmash in 2019, but various technical challenges troubled the shipbuilders.

The “Knyaz Vladimir” is the fourth of Russia’s Borei class submarines and the first of the upgraded Borei-A class. From before, the Northern Fleet operates the “Yuri Dolgoruky”, the Borei class vessel that came into service in 2013.

The remaining two, the “Aleksandr Nevsky” and the “Vladimir Monomakh” are both based in the Pacific Fleet. Another six subs of the class are either under construction or in a planning phase.

Navy base Gadzhievo is located about 50 km north of Murmansk. It is part of the closed military municipality of Aleksandrovsk. Over the last years, Gadzhievo has been developed to be able to house the lion’s share of Russia’s Borei class, as well as Yasen class, subs