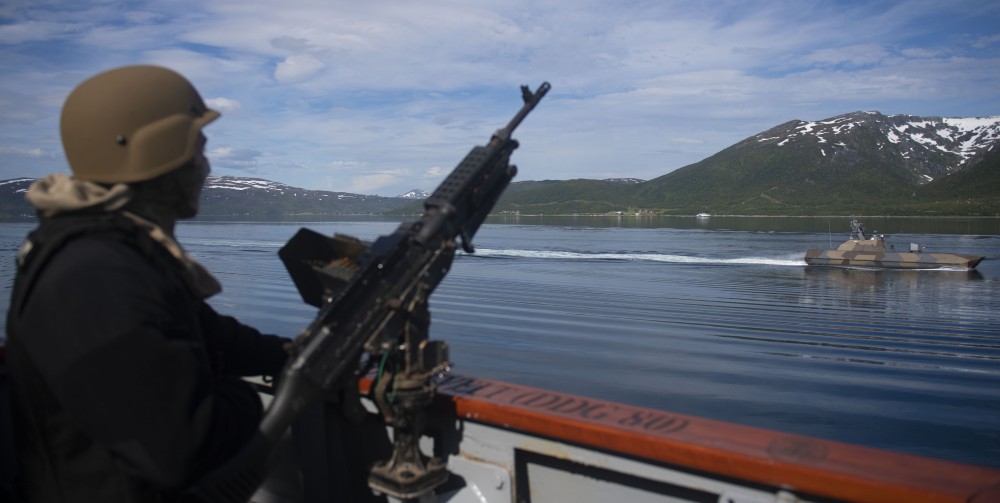 Gunner mans the machine gun on the bridge wing aboard the Arleigh Burke-class guided-missile destroyer "USS Roosevelt" (DDG 80) as the ship sails outside Troms together with the Norwegian navy's corvette "KNM Gnist". Photo: Austin G. Collins / US Navy 6th fleet

The US guided-missile destroyer «USS Roosevelt» has now sailed for more than 28 days above the Arctic Circle.
Read in Russian | Читать по-русски
By

In post-Cold War times, the US military has mainly operated at such high latitudes with aircraft or submarines. 75° in the Norwegian Sea is north of Bear Island and the northeastern coast of Greenland.

The 6th fleet sails Europe and Africa but has this spring and summer had a high-profile on Arctic waters, including first voyages into the Barents Sea since the late 1980s.

“Maritime operations by USS Roosevelt are the most visible and persistent demonstrations of the Navy’s commitment to Arctic security,” said Ryan R. Kendall, commanding officer aboard Roosevelt.

“Today my crew has operated above the 66th parallel for twenty-eight days and counting, and I am thrilled to award them the Navy Arctic Service Ribbon. This ribbon symbolizes Roosevelt’s exceptional maritime operations in the high north and a sustained U.S. naval presence in Arctic waters.”

This is the second voyage the vessel has inside the Arctic Circle as it in May was one of several US Navy ships to sail into the Barents Sea. Earlier in June, «USS Roosvelt» participated in NATO’s exercise, Dynamic Mongoose 2020 taking place in the North-Atlantic and waters further north off northern Norway.

The American missile destroyer also trained together with the Norwegian corvette «KNM Gnist» outside Troms in mid-July.