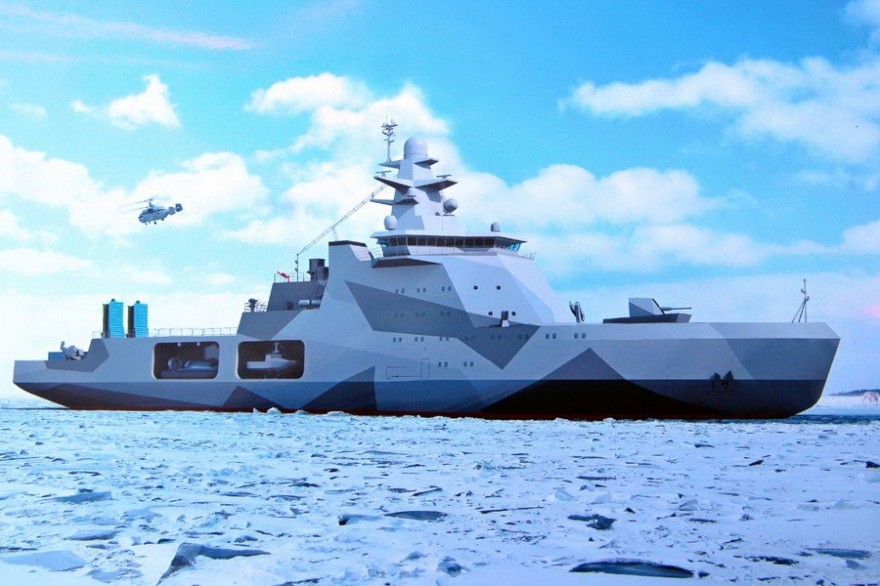 Keel-laying of the new icebreaker, to be named «Purga», took place this week, the Vyborg shipyard announced.

If commissioned as scheduled, the new 114 meters long FSB icebreaker will sail year-round in the Arctic from 2024.

Two similar icebreakers of the Project 23550, to sail for the Russian Navy, are already under construction at the Admiralty shipyard. FSB’s version of the ship, though, will not carry the same weapons as the navy-version. The Russian Navy, presumably the Northern Fleet,  will then get the first icebreakers in the world to be armed with cruise missiles.

“We are confident that construction of this class of ships will be a new step in strengthening the border security of the Russian Federation, including the strategically important Arctic region of our country,” said Vyborg shipyard director Aleksandr Solovyov at the keel-laying ceremony, according to a news-update by the shipyard.

“Russia’s huge resources in the Arctic, the Northern Sea Route, the increased attention of foreign states to this zone of Russia, undoubtedly require us to build up a group of ship to guarantee the solution of border security problems,” said Chief of FSB’s border guard service, General Vladimir Kulishov, quoted by state-controlled RT.

FSB has a second vessel planned, but now detailed information about possible construction timeline is presented so far.

On Friday this week, the Canadian Navy received its first new Arctic patrol ship «HMCS Harry DeWolf», first of a class of site ice-capable warships to sail the waters of Arctic Canada, the Barents Observer’s media partner Eye on the Arctic reported.

Recently, U.S. President Donald Trump said his administration is working to secure 10 icebreakers for the U.S. Coast Guard, although details are still unclear.

FSB’s Coast Guard vessels for the Western Arctic zone is based in Murmansk on the coast to the Barents Sea.