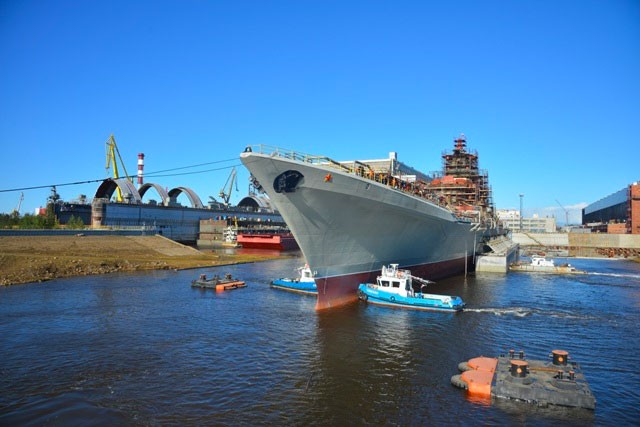 The nuclear-powered "Admiral Nakhimov" will significantly strengthen the capacities of Russia's Northern Fleet.
Read in Russian | Читать по-русски
By

It was a highly complicated technical operation that this week unfolded in the Sevmash yard in Severodvinsk, northern Russia. The 250 meter long battle cruiser Admiral Nakhimov was carefully moved from the dock gate of the naval yard and into the nearby river waters of the Northern Dvina.

It is considered among the most intricate operations for shipbuilders, and on site were Head Commander of the Russian Navy Nikolay Yevmenov, acting regional Governor Aleksandr Tsybulsky and other distinguished guests.

It was a memorial moment for the constructors of the vessel that is due to be formally returned to the Russian Navy in year 2022.

The reconstruction of the Admiral Nakhimov has been construction odyssey. The more than 25,000 ton deadweight vessel in August 1999 docked in Severodvinsk and has since been on site. In major periods, work has been idle.

But over the last few years, operations have significantly progressed, and the construction process is now moving in line with schedule, according to the Russian Navy.

A key part of the reconstruction is now completed, shipyard Sevmash informs. What remains to be done is to replace key life support and energy systems. New radio-technical equipment and missile and artillery complexes will be installed.

Following the upgrade, the Admiral Nakhimov will have completely new tactical and technical characteristics, the shipbuilders say.

The battlecruiser was originally built in 1986 and served in northern waters until 1999. It was one of four ships of the Kirov class (project 1144). Currently, only the Pyotr Veliky is left sailing. That ship is expected to undergo major upgrades as soon as the Admiral Nakhimov enters service.

It is believed the that the upgraded battleship will be equipped with missile systems Kalibr, Oniks, as well as the new supersonic weapon Tsirkon. It might also have onboard the systems Fort-M, Pantsyr-M, Paket-NK and Otvet.