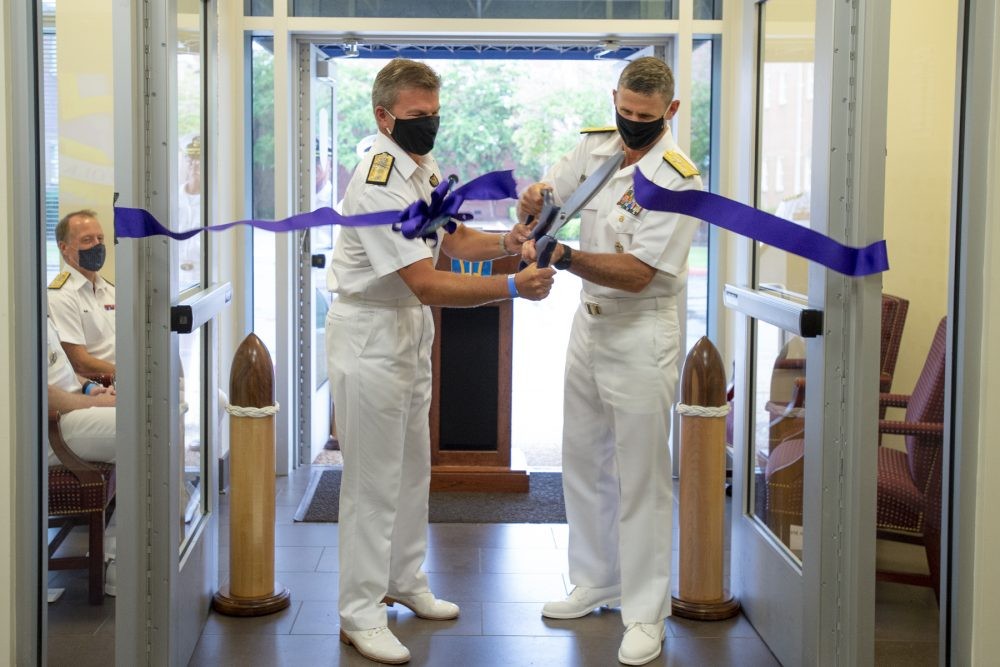 NATO’s new U.S.-based Atlantic Command was declared operational in a ribbon-cutting ceremony in Norfolk, Virginia on Thursday, underlying the alliance’s efforts to secure its lines of communications in the North Atlantic and the European Arctic amid growing Russian presence in the region.
Read in Russian | Читать по-русски

Joint Force Command Norfolk, established to protect sea lanes between Europe and North America, is the first NATO headquarters dedicated to the Atlantic since 2003, when the alliance abolished the position of the Supreme Allied Commander Atlantic.

The command is co-located with the U.S. Second Fleet and is led by U.S. Vice Admiral Andrew Lewis, the fleet’s commander.

The command will plan, prepare and conduct operations across air, land and sea covering vast geographic areas, from the U.S. East Coast, past the so-called Greenland-Iceland-U.K. (GIUK) gap and into the Arctic, NATO officials said in a press release. Day-to-day NATO maritime operations will continue to be run out of Allied Maritime Command (MARCOM) in the United Kingdom, officials said.

Timothy Choi, a maritime strategy expert and Fellow of the Canadian Global Affairs Institute, said the Atlantic Command won’t be dealing with the North American Arctic, which remains firmly under the purview of the binational Canada-U.S. North American Aerospace Defense Command (NORAD).

“The standing up of Atlantic Command/JFC Norfolk highlights NATO’s recognition that they can no longer take the secure transport of reinforcements and support materiel between North America and Europe for granted,” Choi said.

Andrea Charron, head of the Centre for Defence and Security Studies at the University of Manitoba, said the GIUK gap is seen as the main maritime access point for getting from the North Atlantic into the Arctic and vice versa.

“During the Cold War we needed to watch that gap very carefully to monitor Soviet Union movements,” Charron said. “But after the Cold War NATO did away with that position thinking it’s less vital to monitor given the world now had the Russian Federation.”

Choi said the last two decades saw NATO with only two other Joint Force Commands, both of which focused on eastern and southern Europe, in addition to Afghanistan.

There was little concern with how equipment and personnel would cross the Atlantic for those operations and exercises, he said.

“Following the recent return of relatively large numbers of Russian submarines through the GIUK gap and into the Atlantic, however, NATO felt this crossing may become contested in the future, requiring a more coordinated effort between countries on all sides of the Atlantic,” Choi said.

The standing up of the Atlantic Command is tightly connected to the reconstitution of the U.S. Second Fleet, which is the main fighting force of the new Joint Force Command, Charron said.

“It recognizes that pivot of the U.S. to the Arctic, the growing concern of NATO Arctic states like Norway and Iceland, as well as the United Kingdom and others that this GIUK gap is a seam between USNORTHCOM, EUCOM, NORAD and NATO – all of these seams that we cannot leave unsurveilled,” Charron said.

‘Return to the old normal’

Choi said the creation of Atlantic Command marks “a return to the old normal.”

“During the Cold War, Supreme Allied Commander Atlantic (SACLANT), also based out of Norfolk, was in charge of roughly the same geographic area and the same duties,” Choi said.

“Regional allies provided NATO with their maritime domain awareness capabilities in peacetime, and naval assets were earmarked for NATO operational control should the need arise,” Choi said. “This included even the minimally-armed patrol ships of the Danish navy in Greenland, and I would not be surprised to see that arrangement return.”

Charron said the increased NATO and U.S. attention to the European Arctic will likely be well-received in Norway, which has been warning the alliance of the growing Russian capabilities and activities in the Arctic.

Katarzyna Zysk, professor and deputy director of the Norwegian Institute for Defence Studies, said Norway is interested in greater NATO focus on the European Arctic, but Oslo also has to perform a tightrope act when it comes to its relations with Moscow.

“The very foundation of the Norwegian policy in the Arctic towards Russia and NATO is this fine balancing act between having the region on NATO’s agenda, having credible military presence there but not too much in order not to provoke Russia,” Zysk said.

“There is this balance that Norway tries to find between maintaining good relations with Russia and strengthening NATO’s attention, and understanding of what is going in this strategically important region.”

While Canada has traditionally been more reticent about greater NATO involvement in the Arctic, Zysk said she believes it’s very important for the alliance to maintain a stronger presence in the North and to develop a common understanding of the situation in the region, especially in the European Arctic where most of the Russian activity occurs.

“The united response is extremely important for the effective and credible deterrence and I think this command is strengthening that perception also on the Russian side, which, in my view, will contribute to stabilizing the situation,” Zysk said.

Choi said it’s important to remember that for Russia during the Cold War SACLANT was also in charge of training for offensive carrier-based operations in the Norwegian Sea and fjords against the Russian bases on the Kola Peninsula during the mid-1980s.

“Russia will likely see the standing up of JFC Norfolk through that lens, and will certainly frame it as another example of NATO expansionism and belligerence as part of their ongoing propaganda efforts,” Choi said.

“Whether Russia has any actual ability to respond at a material level is a different story, though it may well see infrequent high-intensity naval deployments to the Atlantic using current assets when their readiness allows.”

Charron, however, stressed the importance of not hyping up the growing military activity in the Arctic, especially in the current political context of upcoming elections in the U.S.

“I would urge everybody to not use alarmist rhetoric,” Charron said. “We are very concerned about Russia and China, we do watch them, but that doesn’t necessarily mean we are going to automatically assume nefarious intent all the time.”

There are things that Russia does in the Arctic that are very helpful, she added.

“They will be assuming the chairmanship of the Arctic Council in 2021 and also the chair of the Arctic Coast Guard Forum, and these are really important fora in which to discuss issues,” Charron said.

One of such issues is the need to come up with a code of professional conduct in the Arctic to avoid incidents and accidents turning into a conflagration that nobody wants, she said.