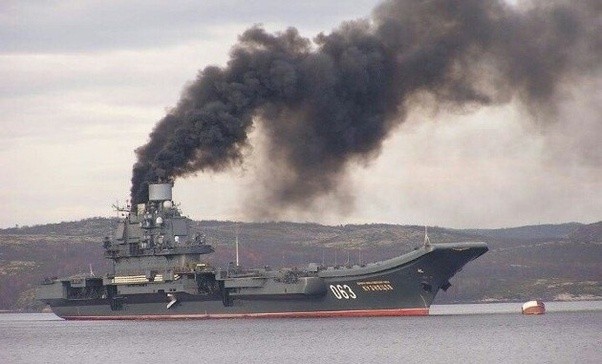 The Northern Fleet's aircraft carrier will embark on tests in the Barents Sea in 2022 with main boilers, diesel generators and main turbo-gear units replaced.
Read in Russian | Читать по-русски
By

The Russian Northern Fleet’s only aircraft carrier was infamous for blocking the skies with black, ill-smelling smoke when sailing out from the Kola Peninusla on voyages in the Barents Sea, the North Atlantic and even to the Mediterranean. The engines were old, and the black smoke was caused by incomplete combustion of heavy fuel oil and engine lubricant.

Next summer, Admiral Kuznetsov will be docked at the new facility currently under construction at Zvezdockha’s shipyard No. 35 in Murmansk.

Then, by 2022, the largest in the Russian navy will be ready for sea trials in the Barents Sea.

During its modernization, the aircraft carrier has been followed by accidents. In October 2018, the flight-deck was damaged as the floating dock holding Admiral Kuznetsov sank and a crane fell over. Last December, a fire started during welding work in one of the engine rooms. Two where killed and 14 others were injured.

The ship was commissioned in 1990. Additional to the engines, the current modernization work includes renewal of weapons, electronics and aircraft support equipment. When all work is completed, the warship’s service life will be extended by 5 years, according to TASS.