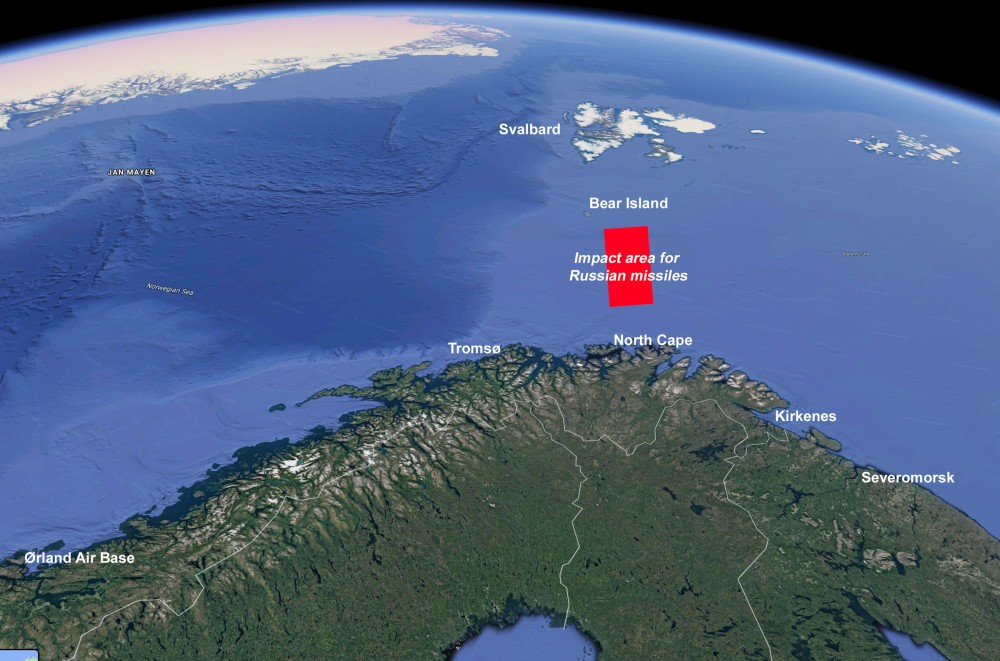 Tension rises between NATO and Russia up north with both sides showing off military hardware.
Read in Russian | Читать по-русски
By

“Impact area for Russian missiles,” reads a short notice to airmen (NOTAM) for the danger area activated north of mainland Norway. The warning is set for the period February 18 to 24.

The timing is likely not a coincidence. Within the next week, four US Air Force B-1 strategic bombers are anticipated to arrive at Ørland Air Base in southern Norway in a first-ever deployment to the country. According to the Dutch aviation news Scramble the date of arrival is said to be somewhere late in week 7 or early in week 8.

A support team of 200 American soldiers has already arrived at the Air Base, preparing to serve the B-1 bombers.

“Given the timing and location of the Russian missile test, and the anticipated arrival of the US B1 bombers, the missile exercise may well be intended to serve a signaling purpose,” said Senior Research Fellow at the Norwegian Defence Research Establishment (FFI), Kristian Åtland to the Barents Observer.

He said this could be Moscow’s way to communicate dissatisfaction with the temporary presence of US bombers on Norwegian soil.

“Incidentally or not, the Russian test area is located between 22 and 25 degrees eastern longitude, in other words around the 24th meridian,” Åtland explains. He elaborates: “Allied aircraft do normally not conduct training activities east of this line, due to Norway’s self-imposed restrictions.”

Stordal said it is for Russia to “ensure the safety in the area.”

“From the Norwegian side, we of course monitor such activity in our immediate areas with the capacities we find naturally,” Major Stordal said to the Barents Observer.

The waters between North Cape and the Bear Island is important fishing grounds for both Norwegian, Russian and EU trawlers.

The waters here are also of strategic importance in the bigger power game between NATO and Russia, just like during the days of the Cold War. It is here, from the North Cape, via the Bear Island and north to Svalbard that the shallow Barents Sea meets the deeper Norwegian Sea.

Kristian Åtland explains: “This is an area which has traditionally played an important role in Russian defense planning and the Northern Fleet’s “bastion defense” strategy. Simply out, the Russian Navy has a “sea control” ambition in the maritime areas east of this imaginary line, and a “sea denial” ambition in the maritime areas further west and south, which are deeper than the Barents Sea.”

Of key importance for Moscow in case of conflict is to ensure the survivability of its second-strike nuclear assets, the ballistic missile submarines based with the Northern Fleet.

In such scenario, sailing west of the Bear Gap will make it much harder for NATO to track them in the deeper parts of the North Atlantic.

The NOTAM warning for the coming days does not specify which missiles will be launched in, or towards, the impact area announced.

However, the press service of the Northern Fleet on February 16 informed about the missile cruiser Marshal Ustinov currently sailing on a mission in the Barents Sea. The warship has been working in interaction with anti-submarine aircraft, training joint search for imaginary enemy submarines.

Marshal Ustinov sailed out from Severomorsk on February 9 and is armed with anti-ship cruise missiles, surface-to-air missiles and torpedoes.

Kristian Åtland said Russian live-fire exercises and weapon testing in the White Sea, the Barents Sea, and even the Norwegian Sea, has become an integral part of “the new normal” in the High North.

“It may at times be a challenge for fishing vessels operating in these maritime areas, as well as the commercial air traffic that normally goes through the northern air space. On the other hand, it is a good sign that Russia abides by established notification procedures, including the NOTAM (Notice to Airmen) system,” Åtland said.