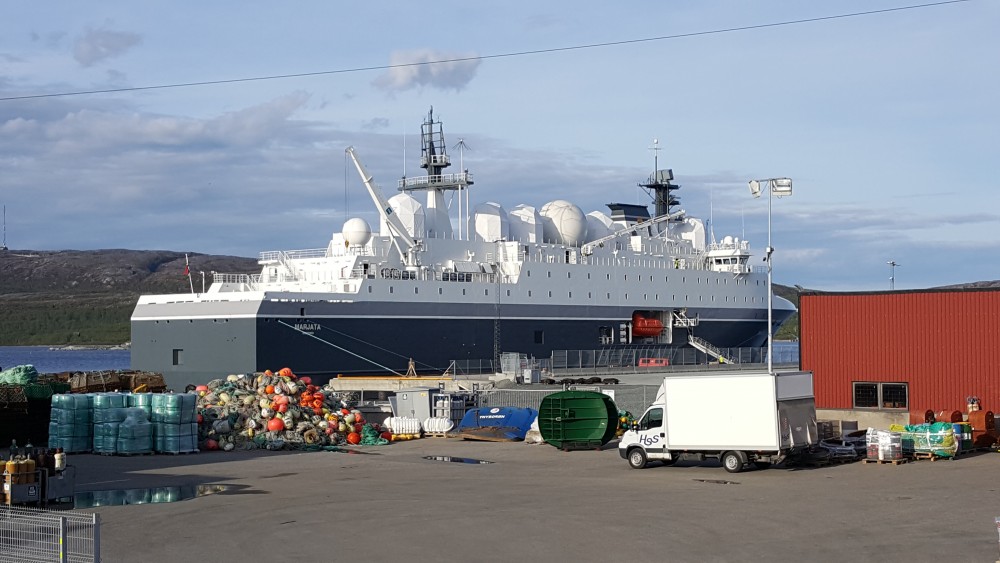 "Marjata" at port in Kirkenes, a few kilometres from the border to Russia. Photo: Thomas Nilsen

Bergen Engines, now bought by Russian-controlled TMH International, is in charge of maintenance and service for the spy ship Marjata.
Read in Russian | Читать по-русски
By

Rolls-Royce earlier in February signed an agreement to sell the Bergen Engines medium-speed gas and diesel engines business to TMH International, the international branch of TMH Group, for €150 million.

The engineering plant on Norway’s southwestern coast has built the engines for Marjata, a spy ship operated by the intelligence service in charge of surveillance of Russian naval activities in northern waters.

Marjata is believed to keep an extra good eye on the Northern Fleet’s nuclear submarines sailing out from the Kola Peninsula for patrols and exercises in the Barents Sea and North-Atlantic.

Business online E24 was first to report about the possible security challenge linked with the future maintenance of the spy ship’s engines.

TMH International is headquartered in Switzerland, but controlled by Transmasholding (TMH), a Moscow-based company own 80% by Iskander Makhmudov, Andrei Bokarev, Dmitry Komissarov and Kirill Lip.

Some of Transmashholding’s products are used for military purposes, according to a report about transborder corruption by EU-Russia Civil Society Forum.

One example is the engines to the Krasnodar diesel-electric submarine launched in 2015 which is produced by the Kolomensky Zavod, also known as Kolomna Locomotive Works, a factory own by TMH.

In 2018, Kolomensky Zavod debuted at Russia’s Army forum with new diesel engines for, among others, the navy’s surface warships and submarines, according to Mil.Press.

Over 700 engines made by the Kolomensky Zavod is delivered to Russian and foreign ships, the company could tell at the Army-2018 exhibitions.

Experts of the company have for instance produced special power-plants for Project 20380 corvettes, Project 22350 frigates and the Project 11711 landing ships, all among the newest and most powerful warships in the Baltic Fleet, the Black Sea Fleet and Northern Fleet.

Norway’s Defense Minister, Frank Bakke-Jensen, said to NTB that the security for Marjata is taken care of, despite the sale of Bergen Engines to Russian owners.

He makes clear that TMH is not currently doing maintenance on the Norwegian spy ship.