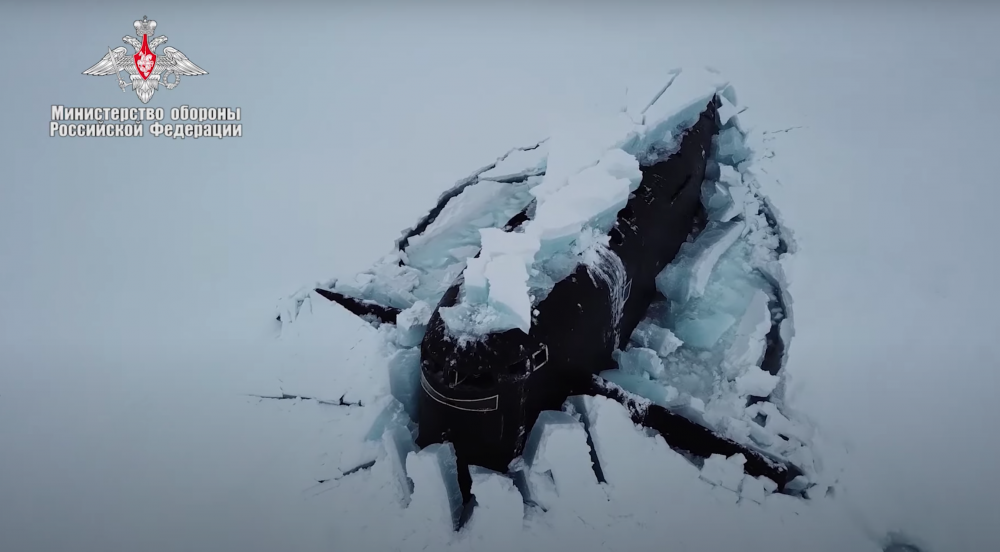 The sail of one of the Delta-IV class ballistic missile submarines breaking through the ice. Screenshot from Defense Ministry video

“As part of the Arctic expedition, three nuclear-powered submarines surfaced from under the ice inside an area with a radius of 300 meters for the first time in the history of the Russian navy,” said Admiral Nikolay Evmenov in a direct video-call with President Vladimir Putin in Moscow.

Evmenov is Commander of the navy.

A recording of the video-conversation and transcripts are posted by the Kremlin.

The Defence Ministry has made this PR-video from the Arctic exercise.

The three submarines, two Delta-IV class and one Borei class can carry up to 16 ballistic missiles each. It is assumed each missile can be armed with four to six nuclear individual warheads (up to 64 to 96 on each sub), bringing the total number of nuclear warheads surfacing in the high Arctic to more than 200.

Russia’s comprehensive Arctic military drill has been going on all week since March 20th.

“Under the leadership of the Headquarters of the Navy, the integrated Arctic expedition Umka-2021 is being conducted. For the first time, in accordance with a single concept and plan, complex combat training, research and practical measures of various directions is carried out in the circumpolar region.” Admiral Evmenov said in the video link to the President’s office.

He elaborated, saying a “total of 43 events have taken place at Franz Josef Land and the nearby ice-covered waters in the frame of the exercise.”

“Also, a tactical exercise was conducted for a unit of the Arctic motorized rifle brigade in difficult weather conditions, in unfamiliar terrain away from the main base, “Admiral Evmenov said.

The main base is located at Nagurskoye on the Aleksandra Island where Russia recently upgraded the airport with a 2,500-meter long runway capable of serving both fighter jets and larger military transport planes for year-round flights.

Temperatures reached minus 25 to 30 degrees Celsius during the exercise and wind was up to 32 meters per second.

Simultaneously as the soldiers were training on the archipelago and the submarines were sailing under the ice-cap and shooting torpedoes, a pair of MiG-31 fighter jets were in the skies above the North Pole. The flight included mid-air refueling.

Admiral Nikolay Ecmenov assured the President that the navy will continue in the future, each time with the aim to develop new, previously unexplored areas.

Norway and UK with joint training

This week, Norway and the United Kingdom have conducted joint naval training in the north with the frigates “HMS Lancaster” and “KNM Thor Heyerdal”.

“As two maritime nations, good neighbors and allies, we share security interests and challenges with the British. Training like this increases our ability to cooperate effectively and conduct maritime military operations in a safe manner,” said Commander on “KNM Thor Heyerdal”, Lars Larsson.

“This contributes to increased safety and preparedness in our immediate areas,” Larsson added.

The Norwegian frigate will continue to stay on watch in the north.