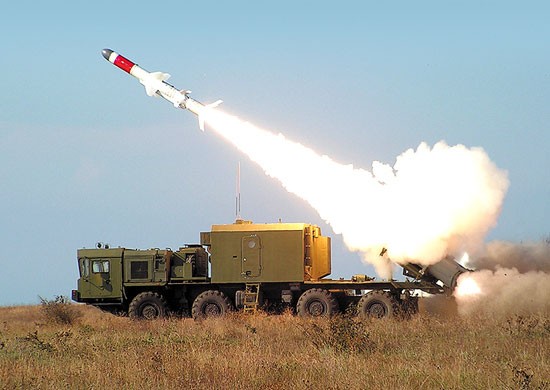 A Bal missile can take out ships up to 5,000 tons and is aimed at protecting the territorial waters now becoming more accessible for shipping as the Arctic sea ice retreats.
Read in Russian | Читать по-русски
By

According to the Russian Defense Ministry, the first Bal systems are already in place, like on Franz Josef Land in the northern Barents Sea.

Shorthly, the complexes are going to be dotted alongside the entire Northern Sea Route.

The Bal system’s increased deployment follows a statement from last December by Defense Ministry, Sergei Shoigu. He claimed that the number of Bal and Bastion systems of the Armed Forces at the time had only reached 74% of what is needed. He also said infrastructure is developing in the Arctic region. As seen now, his two claims foreshadowed the now announced increase of Bal systems in the Arctic, Izvestia reported.

Entering service in 2008, the Bal is deemed to be multipurpose as it aims to protect the coast, straits, as well as naval bases. It takes about 30-40 minutes to reload the missile system once it has fired, its range is 120 kilometers, and the complex has the capacity to fire both single missiles as well as volleys of up to 32 subsonic missiles. The complex also has night vision amongst its arsenal of modern devices. However, debatably its most useful feature is its mobility and short deployment time of only ten minutes.

According to military expert, Viktor Murakhovsky, the Bal missile defense system’s purpose is exactly what its name implies, to defend.

Russia has no intention of using the missile system in international waters, Murakhovsky said to Izvestia.

Deployed along the Northern Sea Route, the aim is to protect Russia’s own territorial waters from any dangers or threats, he underlined.

Murakhovsky said no one will be able to enter Russia’s Arctic waters without difficult hindrance. Exceptions can be made for civil vessels adhering to appropriate rules, which can in specific cases enable them to pass the territorial waters. However, warships will be strictly prohibited, especially in the case of military conflicts or escalations.