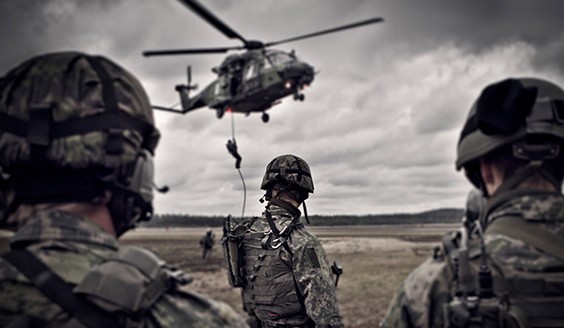 Northern Finland to see biggest military exercise of the year

7,000 troops will be taking part in exercises in the forests of Finnish Lapland, including a contingent from neighbouring Sweden.
Read in Russian | Читать по-русски
By

The Finnish Defence Forces’ largest field manoeuvres of the year is the ground exercise ‘Northern Forest 21’ being held in Rovajärvi, Sodankylä and Kittilä up until 3 June. The total troop strength of the exercise is around 7,000 personnel, of which 2,000 are reservists.

The exercise began on Monday with artillery and infantry live fire at the Rovajärvi gunnery range which is located within the municipalities of Rovaniemi and Kemijärvi.

The second phase of the operation, field combat exercises, will start on Monday 24 May at Rovajärvi, and areas in Sodankylä and Kittilä. The exercise ends on 2 June and will be the final war games for conscripts being mustered out next month.

“The exercise aims at developing the use of firepower, and the performance of troops in the challenging conditions of northern Finland. The extensive exercise will enable practice for cooperation among large troop entities,” Colonel Kari Pietiläinen of the Finnish Army Academy explained in a press release.

About 350 soldiers from Sweden’s Norrbotten Regiment’s artillery and communications units will also take part in the exercise.

According to the Finnish Defence Forces, training with Swedish troops will aid in developing joint operational capabilities and the maintenance of a common situational picture. This co-operation and its development is based in the strategic concept of defence co-operation between Finland and Sweden.