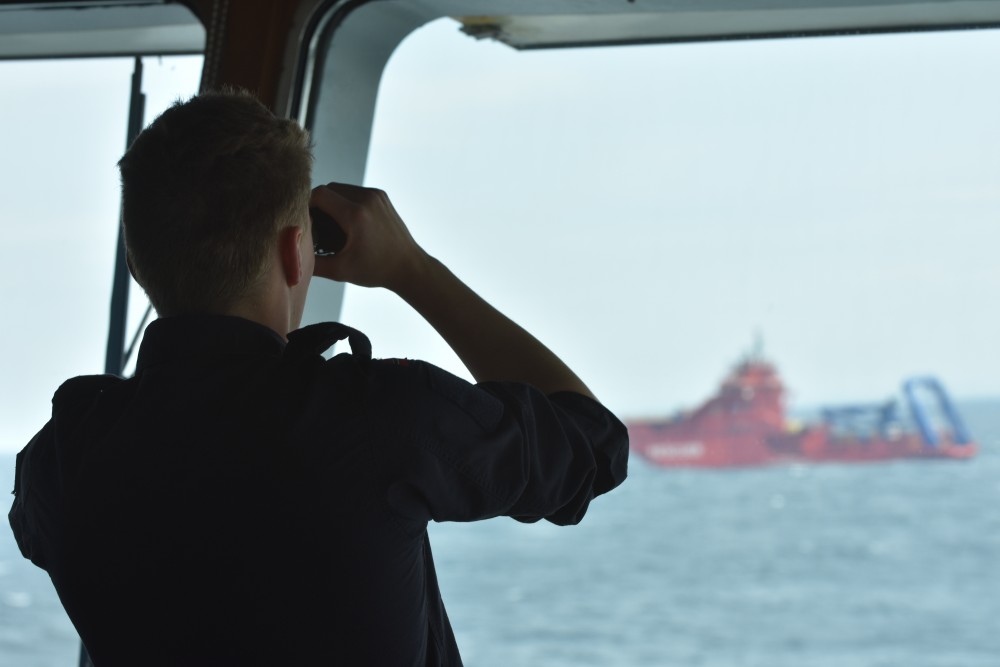 One day after Norway scrambled a pair of F-16 fighter jets to meet Russian military planes outside its northern airspace, the two countries kick off a joint search-and-rescue drill in the maritime border areas.
Read in Russian | Читать по-русски
By

Arctic re-armament spawns international headlines and geopolitical concerns, but few give attention to the military-civilian cross-border cooperation in the sphere of search- and rescue (SAR) and pollution response training going on in the Barents Sea.

A well-coordinated alarm bell was triggered Wednesday morning and resources from both sides of the maritime border set course to the exercise area in the Varanger fjord.

With a clear view to the shores on both the east and west side of the wide fjord, both NATO’s huge military surveillance radars in Vardø, as well as the Russian radars on the Fishermen Peninsula, framed the exercise.

Further to the east in the Barents Sea is the Northern Fleet’s nuclear-powered battle cruiser “Pyotr Velikiy” and the missile cruiser “Marshal Ustinov” on combat training together with other warships of the Russian navy. Earlier in the week, U.S. strategic B-52 bombers were in the skies above Scandinavia, and on Tuesday, Norwegian F-16s again took to the skies on a northern route to identify Russian military aircraft north of Finnmark region.

For the uniformed crew on board Norway’s Coast Guard ship “KV Jarl”, however, it is the practical cooperation with the Russian Northern Fleet and rescue services that matters.

The annual Exercise Barents is a single important arena nowadays where Russian and Norwegian armed forces work together.

The scenario is real: Accident with a boat and people missing at sea. Both countries participate with SAR-helicopters. Of equal importance are the Russian Il-38 and Norwegian P-3 Orion, both planes that normally are on military surveillance missions over northern waters keeping an eye on each other’s movements. Today, they fly low over the exercise search area on watch for human-sized dolls in survival suits.

“Both countries have a common desire and interest to hold such live exercise annually. Over the years, the participating parties have developed good professional and personal relationships,” a press release from the Joint Rescue Coordination Centre of Northern Norway (JRCC), reads.

For COVID-19 reasons, this year’s exercise does not include exchange of crew between the different vessels. For the same reason, Russian and Norwegian personnel coordinate tasks via radio communication. Also, journalists, like us in the Barents Observer, monitor the exercise from onshore. Photos in this article, logically, are from previous Barents Exercises. The image gallery below is from the 2019-exercise.

Exercise Barents and Norwegian-Russian cooperation on SAR in northern waters are well known internationally, recognized for their importance and success. The Arctic Coast Guard Forum, where all the eight circumpolar nations participate, highlights the practical experiences gained from Norway and Russia when planning larger coordination efforts.

All Arctic nations agree cooperation is the only solution to meet the growing shipping and industrial activities in the north as climate crisis cause the sea ice to retreat.

Exercise Barents is not only about saving people in distress at sea. Another highly focused cooperation is how to avoid oil spills in the fragile Arctic marine ecosystem. Therefore, the second phase of the drill includes oil spill recovery with lenses on the water from both the Norwegian coastal administration’s ship “Bøkfjord” and the Russian Northern Fleet tugboat “Nikolay Chiker”.

“The sailors of the Northern Fleet are ready to tackle the tasks of eliminating the consequences of an environmental accident caused by an oil spill at sea, the press service in Severomorsk informs.

“For these purposes, the Northern Fleet’s search and rescue missions are equipped with the most modern equipment,” the press release reads.

Trust and paradox: The United States and Russia in the Arctic