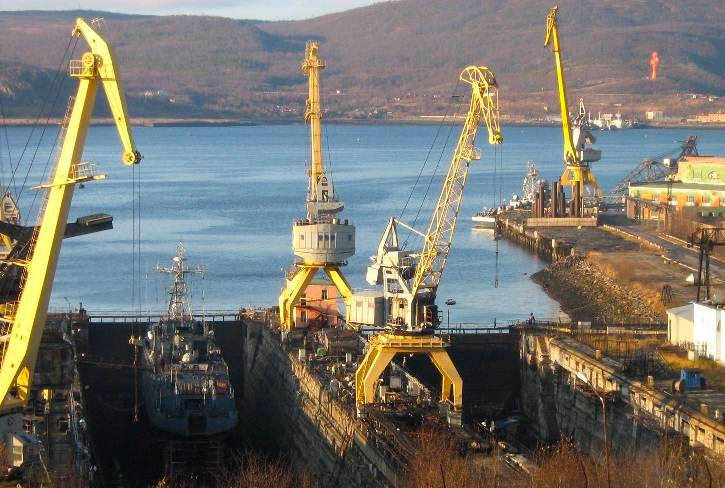 The Shipyard No 35 in Murmansk. Photo: 35srz.ru

Security service officers take action against yard involved in the upgrade of Russia's only aircraft carrier.
Read in Russian | Читать по-русски
By

According to SeverPost, the raid might be connected with suspected mismanagement of state funds earmarked the reconstruction of dry dock designed for works with the Admiral Kuznetsov, the aircraft carrier.

A source says to the news agency that the FSB officers in the morning of the 29th of June arrived on site and subsequently started to question workers and confiscate documents and computers.

The Shipyard No 35 is a regional branch of the Severodvinsk-based Zvezdochka. It is based in Murmansk City and is working closely with the Northern Fleet.

Over the last years, the Shipyard No 35 has been actively engaged in building a new dry dock that can facilitate upgrades of large naval vessels like the Admiral Kuznetsov. When ready, the dock is believed to be the biggest of its kind in Russia.

The upgrades of aircraft carrier Admiral Kuznetsov has been haunted by accidents. In October 2018, the flight-deck was damaged as the floating dock holding Admiral Kuznetsov sank and a crane fell over. In December 2019, a fire started during welding work in one of the engine rooms. Two where killed and 14 others were injured.

The contract sum agreed between Zvezdockha and the Defense Ministry in 2018 for the repair and modernization of the aircraft carrier was 20 billion rubles.

The raid at Shipyard No 35 comes only few weeks after police action against another regional yard, the Shipyard No 10. In that action, company director Yevgeny Zudin was arrested.