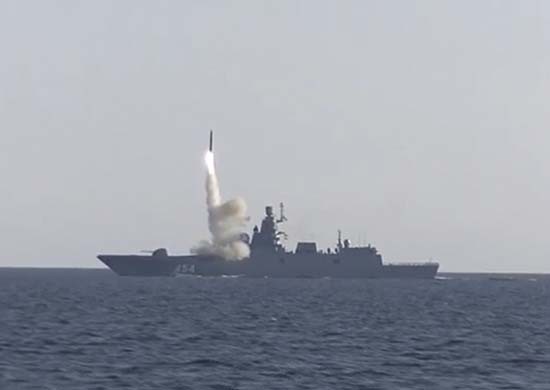 The launch of the Tsirkon missile took place from "Admiral Gorshkov" while sailing the White Sea. Photo: Russian Defense Ministry

Russia's Defense Ministry says a successful launch of hypersonic Tsirkon cruise missile took place from the White Sea and hit a target on the coast of the Barents Sea.
Read in Russian | Читать по-русски
By

The missile, said to be able to penetrate NATO’s existing naval defense systems, reached a speed of Mach 7 (seven times the speed of sound), the Defense Ministry on July 19 informed.

The test is the fourth in a row taking place from the Northern Fleet frigate “Admiral Gorshkov”.

The three previous tests from the same warship in the White Sea happened in the period October to December last fall. A video of the latest launch is released by the Defense Ministry.

The target on the Barents Sea coast was 350 km away from the launch location in the White Sea.

This week, state-affiliated news agency TASS reported that several more tests with the naval Tsirkon cruise missile are scheduled for August, including a first test-launch from the Yasen class nuclear-powered submarine “Severodvinsk”.

The 3M22 Tsirkon cruise missile (NATO name SS-N-33) is a maneuvering winged scramjet-powered anti-ship hypersonic cruise missile to be onboard both submarines and surface warships of the Russian navy.

In 2019, President Vladimir Putin named the Tsirkon missile invincible, saying it could hit targets at both sea and on land at a range of up to 1,000 km with a speed of Mach 9.