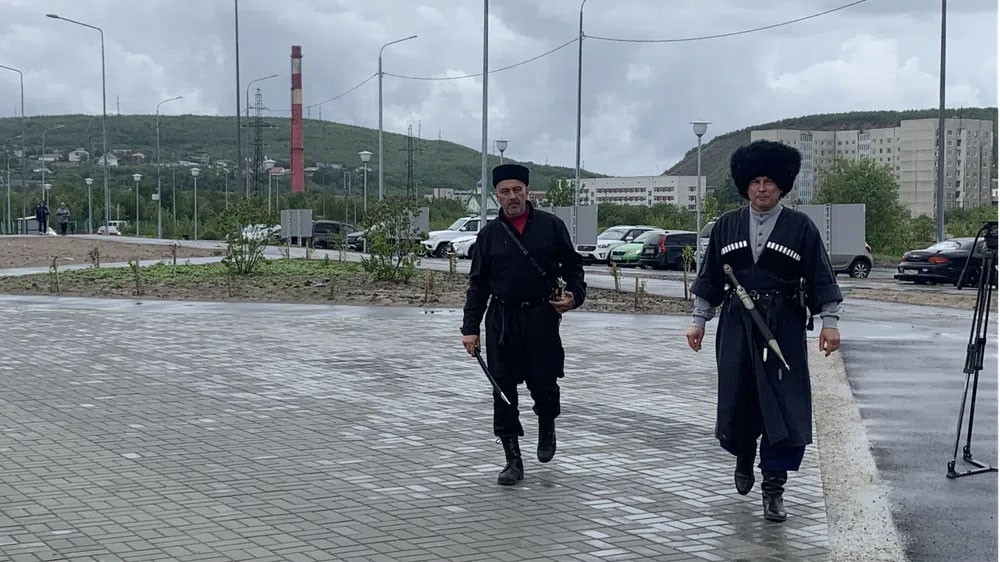 Yuri Chaika offered to take the Cossacks to serve in the Russian National Guard. In Murmansk, they are already receiving rations.

Chaika, the presidential envoy to the northern Caucasus spoke at a meeting of the Presidential Council for Cossack Affairs. Yes, there is such a thing. At first, according to the former Prosecutor General, they thought it would be worthwhile to create separate Cossack battalions in the National Guard and station their residences compactly. Once this was settled, they would be ready to be imported for proper practices throughout the country.

At the same time, reality has long overtaken the most violent fantasies about having “Cossacks roaming around on reindeer”. It is a big country. How and why exactly would they send the Cossacks to the Arctic? Nevertheless, sent they were and in the midst of the third pandemic wave, they held a Cossack culture festival called “Cossacks in the North” near Murmansk.

Then they chose the shores of the Kola river just south of Murmansk as the location for the Cossack games. But this was a questionable choice. The shore of the Kola river has long been the center of scandal.  A year ago, after an investment of 60 million, almost 700,000 Euro, people were surprised at what they got for their money. It was not so much the crooked asphalt and, to put it mildly, meager landscaping. There was also a whale, an amazing sculpture of a whale, the city symbol of Kola. The author of the sketch, the Murmansk blacksmith Maksim Prozhevarov, was also very surprised to look at his brainchild’s “physical realization”.  Instead of the two-meter steel monster he had conceived, which children could easily climb, they had instead built a tiny stone animal on a tall pedestal surrounded by some plastic green waves. The most amusing of all is the “face” of the animal. Local art critics have stated that they see the words: “We had 60 million. We just could not resist.”

Not far from the dubious whale, people with whips have settled down. They walk in grand style. A grant of half a million was issued from the regional budget for this festival. This is only slightly less than the amount that they claimed that they simply could not find for emergency repairs for the regional children’s hospital.  On the Cossacks however, they did not skimp.

Generally, they have not been stingy for several years now. The inexperienced public is still surprised by the very fact of their presence beyond the Arctic Circle. However, they passed a regional law four years ago allowing the Cossacks to receive money from the regional treasury. 500 thousand a year for each of the Cossack societies included in the Russian register.

Of course a scandal erupted some time after the adoption of the law. It turned out that some Cossack representatives believed in a world conspiracy and announced the mass murder of Jews on social networks.

The authorities’ argument was that these internet Cossacks were actually just calling themselves Cossacks. It was mostly posing and they were not the real Cossacks who were receiving grants and subsidies. The argument though is unconvincing because technically, they are all self-proclaimed, if you’ll pardon me for saying.

“I’m still a beginner as a Cossack,” a man with a whip shyly explains. He is wearing a camouflage uniform with three medals “For Service”. These medals are usually given to couriers and bailiffs.  “You’d better talk to my chieftain. Our comrades observe the Cossack way of life, the expected attitude towards service and to our faith. I’m not from a Cossack family generally, but, you know, it’s good to have friends for after my service. Many of our people come to us from the Ministry of Internal Affairs and the FSB.

It was not possible to find out exactly what agency the citizen with the whip worked for. Apparently, he fell into the Cossacks by inertia. But his “chieftain”, a young man in a fur hat and a Circassian, a traditional Cossack uniform, immediately said that he was working in the Monchegorsk security company. The chief was recommended by Petr Leonidovich. This chief of the guard has only 10 Cossacks under his command but they belong to the “Kola Farm” so it would be more accurate to call my subject a foreman.

The traditional Cossack practice of sowing of rye and wheat in Monchegorsk is, of course, not working out. The Norilsk Nickel plant works in the city and so of course, the local landscape around them is already lunar. Therefore, the Cossacks go for things like “maintaining order.” The chief laconically explains that this means “Physical training with weapons and raising children in the proper way”. And then he adds that in addition to protecting order, his association takes the patriotic education of children seriously. They try to teach them the things that we all have in common.

At this point, the conversation is interrupted by a brief discussion with several men armed with sabers about the prospect of “common wives”.

Peter claims that his associates belong to a “Central Army”. This really exists now and it unites the Cossack societies of the regions in places where historically, the Cossacks have never lived. But it turns out that this choice was not one made freely. Everything happened in the course of long term repression and dispossession. In this army however, there is no mention of the Murmansk region and even less so in Monchegorsk. Monchegorsk is generally the historical lands of the Finno-Ugric Sami people.

Meanwhile, Aleksey Zubarev, a corpulent man in blue camouflage and a cap with a blue band, talks into a microphone about how the noble Polar Cossacks are helping out by studying at the Agribusiness Engineering Academy under the direction of the Ministry of Agriculture and the Orenburg State Cossack University. Here, perhaps our comrade’s memory fails him as it was Orenburg State University that merged with the “first Cossack university”. This is how Razumovsky Moscow State University of Technology and Management is currently called.

According to Zubarev, the knowledge gained helps the Cossacks in business, namely in a new dairy production concern which is about to appear in the village of Nikel on the border with Norway. This is clearly about creating an enterprise with the sonorous name “Cossacks in the North”.  The CEO and founder of this milk farm, according to the tax authorities, is this very same Alexei Zubarev. The company was registered however only six months ago so there are no special results yet. There are 30 cows but they are not in Nikel. They are currently housed in the Kola region. This allows the business to retain the status of “a resident of the Arctic zone”. This status comes along with significant tax preferences. The Governor of the Murmansk Region, Andrey Chibis, approved of the Cossacks investing 37.5 million rubles, about 430,000 Euro, into the production of meat and milk in the Pechenga region. Ataman Zubarev, the Cossack word for chieftain, calls it an even more impressive figure of 48 million. So far however, the actual figure that we know of seems to be only 30 million. This money was allocated for the project not by the Cossacks, but by Norilsk Nickel.

The gathered are motley. They are expressive men however in their blue stripes of different widths and large award crosses on their uniforms. Judging by the color of their uniforms, they seem to be a part of the Terek army. But this is not the case. They are the “St. Petersburg City Cossack Society and Imperial Convoy”, no more, no less.

Petr Bolychev, the Murmansk journalist and expert on the history of the region is indignant.  “If they are truly in this for the observance of traditions, and they endlessly talk about this, why did they need to invent a new uniform for themselves? The guys who do historical military reenactments look more decent. They really do exactly reconstruct the traditional uniforms. And when they are in uniform, they do not call themselves “NKVD troops”. This was the name of the interior ministry of the Soviet Union, abbreviated NKVD,”

Peter says that if we are speaking about the history of Kola, the exiled Pugachevites, descendants of the losing participants of the Peasants’ War of 1773–75, also known as the Cossack Rebellion, or even the Razins, those in the lineage of the Peasant War uprising of 1667-1671 under the leadership of Stepan Razin, could theoretically get in.  But it is extremely unlikely that their descendants will be counted among the current “official” Polar Cossacks. And, recalling that the first appearance of the Cossak phenomena happened in Murmansk in the 90’s, he philosophically notes that “The more uncomfortable the governor, the more he is ready to be friends with any kind of local groups from the region.”

“I am a free Murmansk Cossack,” says Vladimir, two meters tall and decked out in green camouflage. Vladimir, according to his own words, had ancestors from the Yaik Cossacks from the Ural mountains.  But his interest in his roots was woken up after visiting the Sober Russia festival. Vladimir now introduces himself as a mentor in the “School of Courage” and teaches “The Way of the Warrior”. The job he and his comrades practice is giving boys who are brought up without fathers a little piece of male energy. The course they teach includes physical training, “stories about moral values” and for some reason, walking on glass and nails.

The Cossack yogi leaves me and joins a group of girls dancing around a birch tree in a tub. The leader of the group is spurring the girls along with a green wreath on his head.

At the festival celebration, there are perhaps two dozen Cossack women and as many spectators. There are also two priests. One of them enthusiastically examines a photo on his smartphone in the company of a man with a red five-pointed star on his cap.

On the posters, you can read quasi-historical information about the Old Russian Cossacks in the service of the princes and the proto-Cossacks of the Golden Horde times. These were Donian Cossaks who were recognized as an autonomous state from the end of the 16th century until 1918. Suddenly, it starts to rain and our modern Cossacks pull windbreakers on over their uniforms and open umbrellas.

The meager exhibition carries on under a canopy. There is a 3D printed whip packed in cellophane, a quote “from Putin”, some jugs, hoops and a recipe for Kuban moonshine.

“A lot of the military comes to us. They like the uniforms and shoulder straps.” the Monchegorsk “ataman” admits artlessly. “There are already a lot of us in the region, maybe as many as three thousand.”

This story is originally published in Russian by Novaya Gazeta.

It is translated to English by Adam Goodman, editor and essayist for the ecological website green2021.org

With license to kill abroad; the National Guard