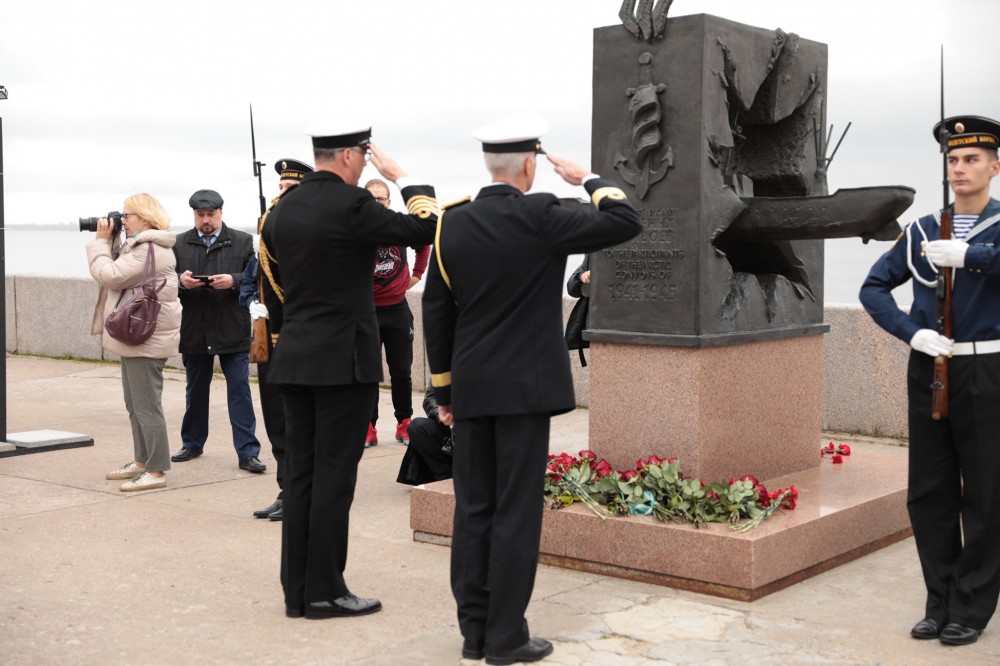 The memorial to the participants of the allied Arctic convoys (1941-1945) on the bank of the Dvina River in Arkhangelsk. Photo: British Embassy in Moscow/twitter

Sailing from the United Kingdom, Iceland and North America, the Arctic convoys to the ports of Arkhangelsk and Murmansk became highly important for deliveries of weapons to the Soviet Union. The voyages were also among the most dangerous faced by any Allied sailors.
Read in Russian | Читать по-русски
By

August 31 marks the 80th anniversary of the arrival of the first allied convoy “Dervish” in Arkhangelsk. According to the press service of the Government of Arkhangelsk region, the memorable date has been celebrated for the past few days with the “Handshake Across the Seas and Oceans” teleconference, which is taking place at the Arkhangelsk Museum of Local Lore.

On Monday, military and diplomatic representatives from both the United Kingdom and Norway attended the ceremony at the memorial on the banks of the Dvina River in Arkhangelsk.

However, the main events of the celebration are taking place today, on the official Northern Convoy Day, August 31st. The long list of events includes the participation of international delegations from Great Britain and Norway, a military sports festival at the Red Pier, a performance by the aerobatics group “Russian Knights”, a festive concert, as well as fireworks to celebrate the important date.

The Arctic route, although the most dangerous, was the shortest and the most opted for. It was used 90% of the time for lend-lease deliveries in Russia. However, the risky trip came at a cost: almost 15% of all cargo were lost on sunken ships en route.

The Dervish was the first convoy to have arrived. Seven vessels were escorted by UK military ships to Arkhangelsk. The UK-delivered convoy provided planes, mines, antitank guns, footwear for the military, rubber, and various other equipment at a time when the Soviet Union did not have any formal lease-lend agreements established (for lending and leasing, rather than selling, war supplies from other nations), news agency TASS reports.

It was Arkhangelsk, the city of military glory, that had initiated and proposed such a celebration for the memorable date. The main idea was to bring together representatives from different countries and generations for whom the Dervish has not only heroically gone down in history but has also been a direct force paving their future and the future of their loved ones.

One such recount was made by Arnold Wilkinson, a 97-year-old veteran of the Arctic Convoys and pilot of the RAF. Wilkinson recalled the harsh and often unpredictable conditions of the war. “I flew in a single-engine plane. The conditions were different - we had to fly, escorting convoys, and over the sunny sea, and at night, and when the weather was terrible,” said Arnold Wilkinson.

Other members at the celebration will include representatives of the diplomatic community, supporters of veteran associations from the allied countries, associates from governmental bodies and the scientific community, as well as cultural figures.

British Ambassador to Russia, Deborah Bronnert, is one of the many members attending the historic celebration of the date. She noted, “I am looking forward to my visit to Arkhangelsk to personally meet with the veterans and thank them for their contribution to the victory. Arctic convoys are a great example of how much can be done together. It is important to pass on to our children the memory of those deeds and sacrifices that our ancestors made,” the Ambassador said as quoted by information portal GoArctic.