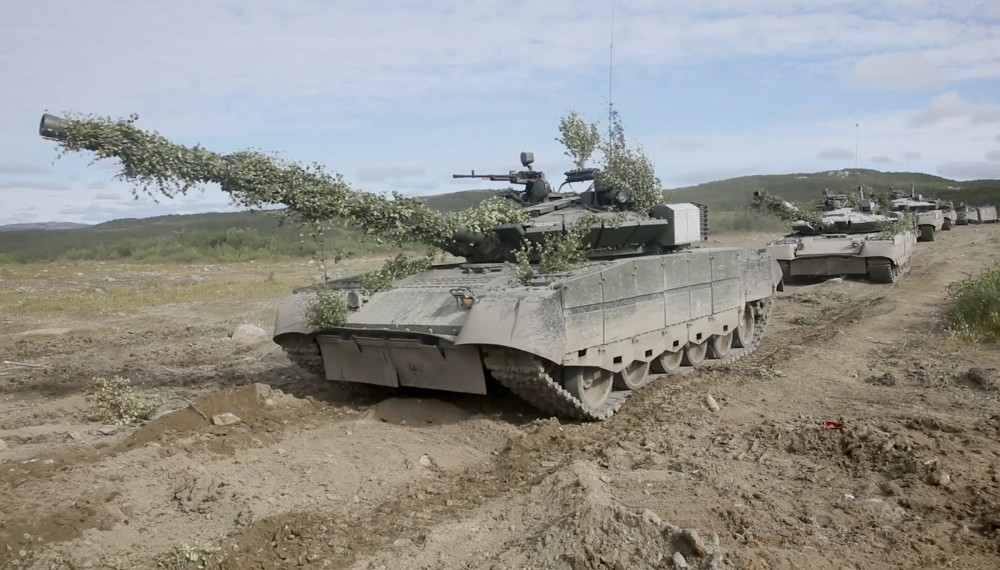 Tanks are this week crossing the fields near Lustari and Kurzanova in the Pechenga valley. Photo: Northern Fleet

More than 10,000 soldiers take part as the Northern Fleet over the next days conducts a command and staff training exercise on land, at sea, and in the air.
Read in Russian | Читать по-русски
By

Marines are shooting with heavy weapons along the coast of the Sredny Peninsula only 20 kilometers from Russia’s border to Norway in the north. The tactical exercise on the coast to the Barents Sea is aimed as an anti-amphibious defense mission and is just one of many parts of the larger command and staff training led by Commander of the Northern Fleet, Admiral Aleksandr Moiseev.

Some 400 soldiers with 80 units of military equipment are moved out to the coast where the exercise shootings take place, including with anti-aircraft missile systems, the press service in Severomorsk informs.

A few kilometers inland from the Sredny Peninsula are tanks rolling in the Pechenga valley. Locals in the border towns of Zapolyarny and Nikel are told to stay away from the areas around Kurzanova and Lustari as live firing with grenade launchers and armored infantry and tanks take place.

The training ground is some 15 kilometers east of the Norwegian border and about 50 kilometers from the border to Finland. Russia’s Defense Ministry has posted this video from the Pechenga valley on Thursday.

About 30 warships are currently deployed at sea as part of the exercise, according to the press service of the Northern Fleet. This includes the vessels currently sailing north from St. Petersburg in the inter-fleet transit, among them the three nuclear-powered submarines “Vepr”, “Orel” and “Knyaz Vladimir”. The vessel groups are Thursday in the North Sea / Norwegian Sea area.

“Today, in designated areas of the North-East Atlantic, a detachment of warships of the Northern Fleet, led by the missile cruiser “Marshal Ustinov” conducts a comprehensive exercise to enforce restricted areas, as well organizing all types of defense of a group of ships crossing the waters,” another press statement said on Wednesday.

Artillery firing at sea targets is done from both “Marshal Ustinov” and the large anti-submarine ship “Vice-Admiral Kulakov”.

Several warships from the Kola flotilla in Polyarny as well as vessels from Severomorsk are now in the Barents Sea where an area north and northeast of the Kola Bay is closed off for civilian shipping with warnings of missile shootings. A few submarines are also in the Barents Sea.

On Wednesday, a U.S. airforce RC-135 surveillance plane was flying back-and-forth just north of the coast to the Kola Peninsula.

Forces from the Kola Peninsula are also transferred to different airfields in the Arctic. Russia has over the last few years modernized and improved airfields at both the Arctic archipelagoes of Franz Josef Land and at Novaya Zemlya.

The scenario in the ongoing exercise is to protect Russia’s border and resolve crisis situations in the Arctic Ocean region.

“The exercises aim to assess the practical skills of headquarters officers in troop command and control, practice timed operations and accomplish combat exercises employing weapons as part of groupings of all-arms forces,” the press service says and adds that “it will allow the commanders to assess the degree of preparation of forces that will participate in the large-scale strategic exercise Zapad-2021” scheduled for mid-September.

Admiral Aleksandr Moiseev has previously said participating in Zapad 2021 will be the Northern Fleet’s “main efforts” this year.

The exercise will demonstrate the capabilities and readiness of the Western Military District and the Northern Fleet and is co-arranged with the dictatorship in Belarus.