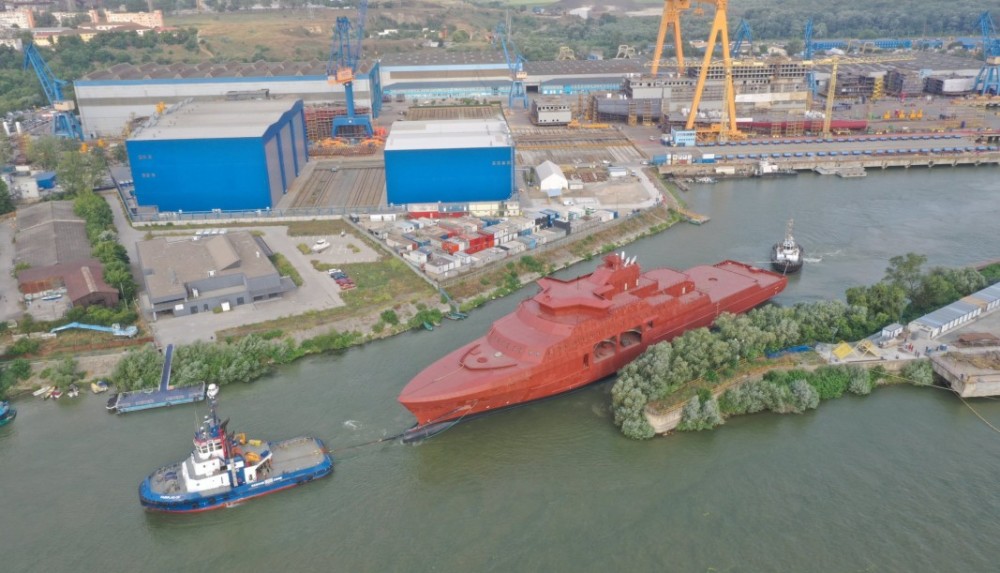 The first hull is now being towed to Norway from the yard in Romania. Photo: Norwegian Coast Guard

Vanishing sea ice gives Norway more waters to patrol. The hull for the first of three new Coast Guard ships to operate in the Arctic zone is now being towed from the shipyard in Romania.
Read in Russian | Читать по-русски
By

The hulls are built at Vard Tulcea shipyard in Romania, while it will be the Vard Langsten shipyard in Norway that will complete the three vessels. Deliveries are expected for 2022, 2023, and 2024.

With vanishing sea ice east and north of Svalbard archipelago, more commercial shipping, naval activities and fisheries start to sail in waters not earlier accessible. That challenges the Coast Guard, which needs to sail in larger areas of previously partly unmapped waters.

Norway has nearly 2 million square kilometers of waters, or seven times larger than its mainland.

Full load displacement of the new ice-strengthened vessels will be 9,800 tons with a draft of 6,2 meters and a beam of 22 meters. Each vessel can accommodate up to 100 people.

Like Norway’s largest Coast Guard vessel today, the “KV Svalbard”, also the Jan Mayen class will house a hangar and a deck for helicopters.

The three new ships will be named after islands in the Norwegian Arctic: “KV Jan Mayen”, “KV Bjørnøya” and “KV Hopen”.

When all three ships are in operation by 2024, the 35 years old North Cape class today consisting of the vessels “KV Nordkapp”, “KV Senja” and “KV Andenes” will be decommissioned.