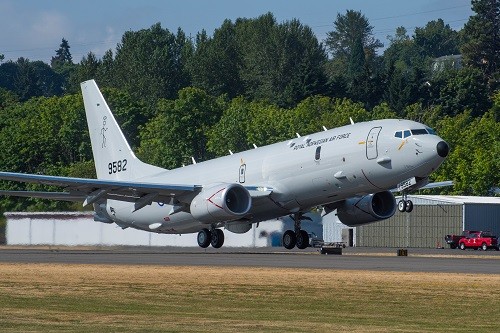 The first P-8A Poseidon, with the characteristic 'Saint' logo on the tail, performed its maiden flight on August 9 from the Boeing Renton Factory in the state of Washington. Photo: Boeing

The plane is the first of five new Boeing P-8A Poseidon to fly out from Evenes airport in northern Norway over waters where Russian submarines are sailing more frequently.
Read in Russian | Читать по-русски
By

P-8A Poseidon will replace Norway’s current fleet of six P-3 Orions, a well-known ‘bird’ in the skies above the Norwegian- and Barents Seas.

Mission systems will be installed and some additional testing will take place before the first of five new maritime surveillance planes will be handed over to the Norwegian Defence Materiel Agency (NDMA) later this year, Boeing informs.

The plane is expected to fly over to Norway early next year. The next four planes will be delivered in 2022 and 2023.

“This inaugural flight is an important milestone for Norway, and the Boeing team remains committed to delivering the P-8 fleet to the NDMA on schedule,” said Christian Thomsen, P-8 Europe program manager.

“The P-8 is a capability that will help Norway improve anti-submarine warfare, anti-surface warfare, intelligence, surveillance and reconnaissance, and search-and-rescue missions, in addition to fostering valuable regional collaboration and interoperability with NATO nations,” Thomsen said.

The Royal Norwegian Air Force currently operates its P-3s from Andøya Air Station. With the introduction of the P-8s, flight operations will move to new facilities at Evenes Air Station, an hour drive from the city of Harstad inside the Arctic Circle, and with short flying time to the important waters outside northern Norway.

In recent years, Russian Northern Fleet submarines have increased their sailings west of the Barents Sea, into the much deeper Norwegian Sea in the North-Atlantic. Especially the 4th generation Yasen-class multi-purpose subs, sailing more quietly and armed with long-range cruise missiles, are of concern for NATO countries, including Norway.

The P-8A aircraft are equipped with sonobuoys that enable them to detect submarines. In addition, the planes have the ability to launch torpedoes to destroy enemy submarines.

The Norwegian maritime surveillance aircraft do also have an important role in the country’s fishery control, keeping an eye on trawlers operating in the Barents Sea.