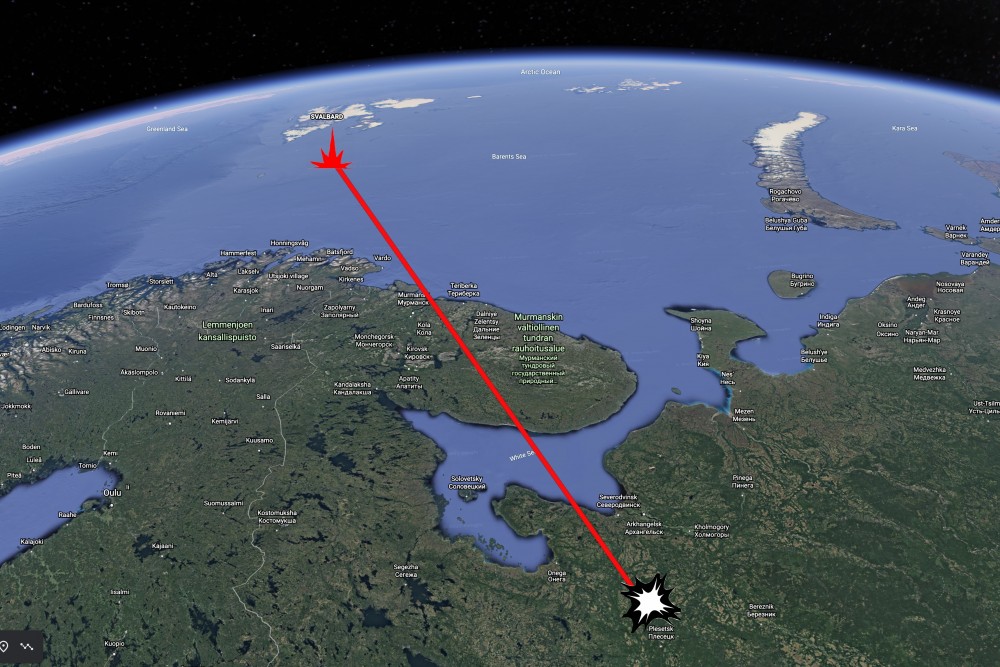 The Soyuz rocket is set to blast off in the evening on September 9th from the cosmodrome in Plesetsk, Arkhangelsk region. Map. Barents Observer/Google Earth

The payload fairing of a giant Soyuz rocket will have reentry and crash somewhere around 75°N in the northwestern Barents Sea late Thursday evening.
Read in Russian | Читать по-русски
By

Notice to Airmen (NOTAM) is filed by Russia via the warning system of the International Civil Aviation Organisation (ICAO). The agency, which is under the United Nations, aims to ensure safety for everyone flying.

Coordinates for the outer limits of the warning area locates it in the centre of a triangle between the Island of Hopen, the southern tip of Spitsbergen, and Bjørnøya (Bear Island) in international waters of the Norwegian sector of the Barents Sea.

A few tens of fishing vessels and trawlers were sailing inside and outside the warning area Tuesday morning, according to the online AIS tracking service MarineTraffic.

While the NOTAM warning says nothing about what kind of missile might come, several tracking blogs for upcoming space launches list a Soyuz 2.1v to blast off from Russia’s Plesetsk cosmodrome in the Arkhangelsk region for Thursday, September 9.

The rocket will be launched between 9 pm and 11 pm Central European Summer Time (CEST). This timing match with the ICAO warning set for 7 pm to 9 pm (Zulu/GMT).

Senior Research Fellow at the Norwegian Defence Research Establishment (FFI), Kristian Åtland, is following Russian military activities in the north, including issued NOTAM warnings. He says this is the first missile impact area that Russia has announced in Norway’s neighbourhood in quite some time.

“The location of the announced impact area, in the northwestern part of the Barents Sea between Svalbard, Bear Island and the Island of Hopen, indicates that it may be related to a planned missile launch from Plesetsk cosmodrome and the downfall of debris from a multi-stage rocket. The octagonal shape of the area, and the short duration, may also indicate this,” Åtland says to the Barents Observer.

He adds that rocket debris has been seen before.

“This area has been used for similar purposes in the past, most recently in November 2019.”

The cargo to be lifted into space by the Soyuz rocket is listed as military and secret. However, according to the site RocketLaunchLive, it is believed to be part of the Razbeg-1 mission, bringing small military optical reconnaissance satellites into orbit.

The Soyuz 2.1v has also six times previously been used to carry military satellites into space, including from the cosmodrome in Plesetsk, according to Wikipedia. Five of the six launches were successful.

The rocket has several stages, and it is likely the payload fairing that will fall down south of Svalbard. Before that, a part of the rocket will fall down north of Murmansk in the southern Barents Sea.

Little is known about any possible fuel toxics that might remain in the rocket stage as it falls to sea.

Author of the report, Michael Byers, said not all the fuel onboard a rocket is consumed during a launch and the residual fuel tends to escape the incoming stages. It could contaminate the impact site.