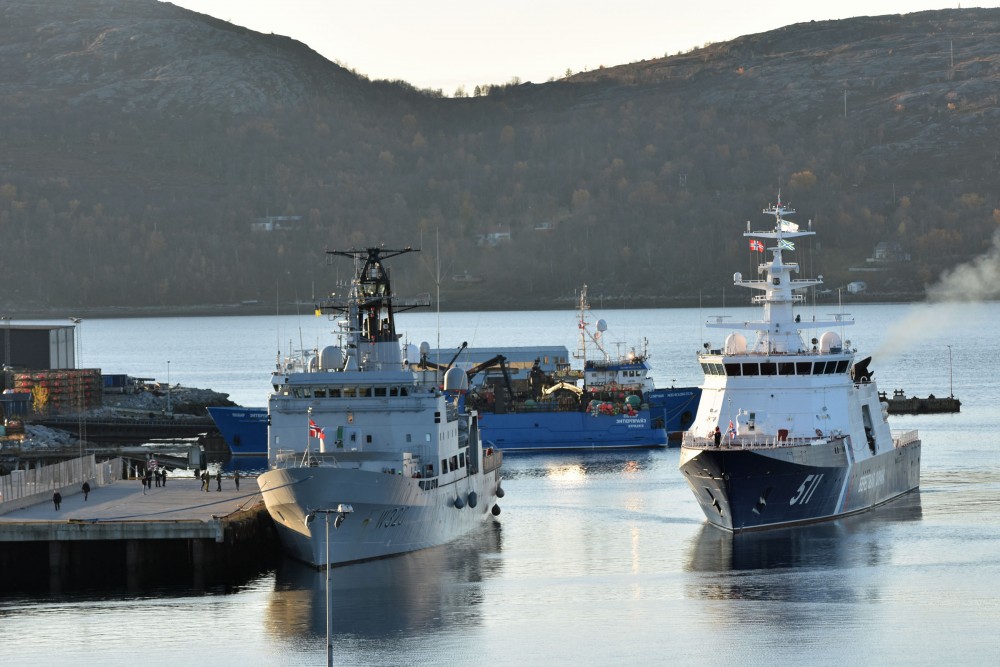 After a two years break caused by the coronavirus pandemic, chiefs of the Norwegian and Russian coast guards meet in person for talks on preparedness and joint search and rescue in Arctic waters.
Read in Russian | Читать по-русски
By

It was a rare sight when a Russian coast guard vessel this Wednesday slowly plowed the waters of the Bøkfjord Bay and moored at the quay of Kirkenes.

It is believed to be the first time that the Polyarnaya Zvezda, a part of the FSB’s new and modernized fleet of Arctic vessels, has made port call in a foreign country.

On board the 93 meter long ice-class ship was Lt. Gen. Stanislav Maslov, the powerful Chief of FSB’s Border Guard Directorate.

On its way to Kirkenes, Maslov and the Polyarnaya Zvezda had met Norwegian coast guard vessel KV Nordkapp at the two countries’ 12 nautical mile maritime border line in the Varanger fjord. A minor joint search and rescue exercise was conducted and top leaders from both sides subsequently made visits to each other’s vessels.

The two ships accompanied each other into the Norwegian fjord and the Polyarnaya Zvezda in the Kirkenes port ultimately placed itself side-by-side with the Nordkapp.

“We have a good cooperation,” says Lieutenant General Yngve Odlo.

“We today met for the first time in two years and have had good and open dialogue on a range of issues”, he told the Barents Observer.

That first of all includes border management, coast guarding, search and rescue.

“You know, we work together more or less all the time, we work with the same issues. We stand on each sides of the border, do fishery inspection, follow up fixed roles and responsibilities and on this level we have a good cooperation. “

The two countries have successfully cooperated in northern waters for several decades. They manage the wide-stretched waters of the Barents Sea, one of the richest fishing grounds in the world. Distances are big and infrastructure sparse, and the two countries’ coast guard services play crucial roles in emergency situations.

“This cooperation is very important and we have shown that we can successfully do resource management together for many years,” Odlo underlines.

“When incidents appear we have an arena where we can address them. There will always be issues to discuss, he says, and makes clear that “we do not always agree on all points.”

“But the most important of it all is that we sit down and talk with each other,” he underlines and assures that also difficult issues are addressed. But they stay clear of politics.

“Yes, within our settled agenda we can discuss also difficult issues, but there are certain issues that we do not touch.”

Search and rescue is now among the few areas where Norwegians and Russians still uphold a high level of interaction.

But the Norwegian Lieutenant General admits that also this cooperation has changed.

“The issues that we could discuss with Russia before 2014 are no longer addressed,” he explains. “Now we have limited our joint actions to practical issues, to the issues that must be addressed between two neighboring states, first of all related to the border, natural resource management and search and rescue.”

Odlo is confident that the two countries will be able to efficiency interact if case of a serious crisis.

“I have great faith that this cooperation will work and function in case of a serious accident or incident, at least we are in a position to handle it in the best possible way,” he underlines. As a matter of fact, the only way to handle a major incident in the wide-stretched region is to cooperate, he explains.

The high-ranking Norwegian military openly spoke with journalists as the two countries’s vessels were at the Kirkenes Port. The same was not the case with Russian delegation, which categorically turned down all requests from the press.

That must be respected, Odlo underlines to the Barents Observer.

“They have their system and we have our’s. I am glad to speak with you and then I fully respect that my colleague sees it differently.”

On Thursday, the delegations laid wreaths at the monument in memory of the Red Army soldiers that liberated Kirkenes in October 1944 from Nazi-German occupation. Click on the gallery below to see all photos from the ceremony.