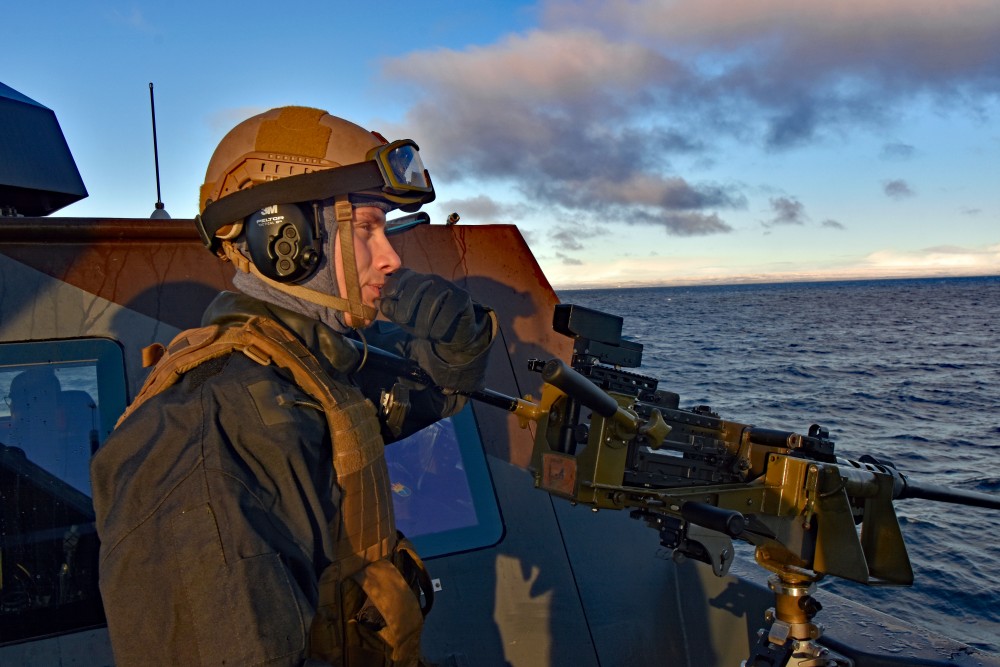 The destroyer “Vice-Admiral Kulakov” and support vessels are conducting combat training missions in the Norwegian Sea says the press service of the Northern Fleet.
Read in Russian | Читать по-русски
By

The large warship “Vice-Admiral Kulakov”, the navy tug “Altai” and the military tanker “Akademik Pashin” were not in a hurry when sailing outside Vesterålen, northern Norway Wednesday and Thursday this week.

A few nautical miles closer to the shore is the Norwegian Navy’s annual FLOTEX 21 exercise underway. 14 Norwegian and NATO allied ships and submarines are participating in the 2-weeks drill taking place in the fjords inside Andøya and the waters outside. Andøya is currently home to the airbase with Norwegian and allied maritime patrol aircrafts keeping track of Russian submarines sailing out from the strategically important Kola Peninsula.

“Vice-Admiral Kulakov” has been on a world-ocean voyage since late June, sailing the Mediterranean with visits to Syria, Algeria and Cyprus, as well as conducting anti-piracy guarding of civilian shipping off the coast of Africa and the Gulf of Guinea in the Atlantic Ocean. Now, the warship is en route home to Severomorsk, the main base of the Russian Northern Fleet north of Murmansk.

“… the crew of the large anti-submarine ship Vice-Admiral Kulakov will complete a number of combat training missions in the Norwegian and Barents Seas,” the press service of the Northern Fleet says.

From Severomorsk, the Northern Fleet reports that the support ships will sail to home port sooner than the “Vice-Admiral Kulakov”. The ships were not together Thursday morning.

The Norwegian Armed Forces says in a press statement that the aim of FLOTEX 21 is to build combat power and increase warfare capability in northern waters.

“To achieve this goal, large parts ion the exercise focuses on anti-submarine warfare and submarine hunting,” the statement reads.

Navy Commander Trond Gimmingsrud says this is the largest naval exercise in Norway this year.

“It gives us the opportunity to practice a variety of basic skills. We do it internally for our navy, but also together with allied vessels and air units,” Gimmingsrud says.

The Norwegian navy is active with the two frigates “KNM Thor Heyerdahl” and “KNM Roald Amundsen”, the corvettes “KNM Gnist”, “KNM Skjold”, “KNM Storm” and “KNM Steil” as well as the minesweepers “KNM Rauma” and “KNM Hinnøy”. Support ships are “KNM Magnus Lagabøte” and “KNM Maud.” The two submarines “KNM Utvær” and “KNM Uredd” are also part of the exercise.

Norway’s Coast Guard has several ships in the area, including ”KV Nordkapp” and “KV Heimdal”.

For Norway, building strength with NATO allies in northern waters is a priority in times of Russian military buildups in the Arctic.

“It is an exercise where we tie allies closely to us, and they become better acquainted with operating in our areas. It is good for our safety that they get to know how to operate in our waters even when it is cold and dark,” says Navy Commander Trond Gimmingsrud.

Additional to the Northern Fleet warship “Vice-Admiral Kulakov” and support vessels, there are also a number of Russian civilian ships sailing near the exercise, the MarineTraffic online shows. One of the ships en route north on Thursday morning west of Andøya is “Murman”, the large rescue vessel.