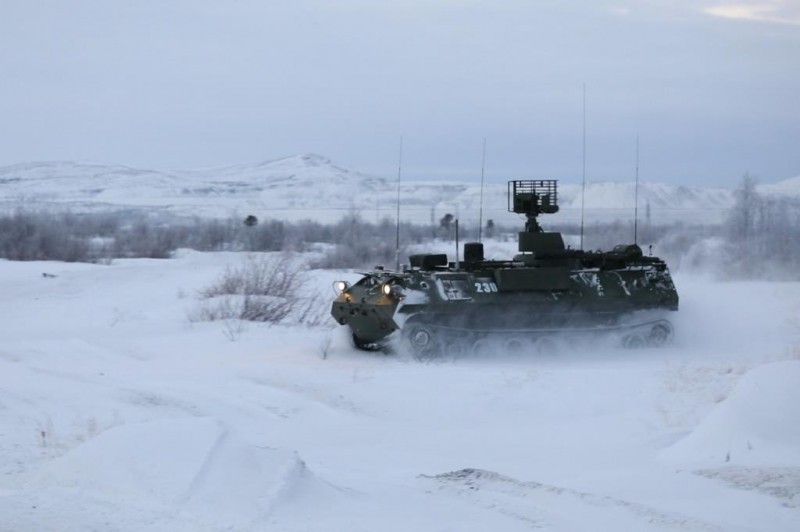 The fully automatic command and control (C2) system strengthens Russian control over air space in the borderland to Norway and Finland.
Read in Russian | Читать по-русски
By

Servicemen from the Northern Fleet’s 200th Separate Motor Rifle Brigade had spent four months in the training field of Yeisk in southern Russia to learn to handle the system. This week, they used their new acquired skills in one of the shooting ranges in Pechenga, few kilometers from the border to Norway and Finland.

“We have been waiting a long time for this equipment,” says Anatoly Raskevich, head of a local missile calculation unit, told Army broadcaster TV Zvezda. “We are very happy and satisfied that we have acquired this technology and can work properly with the combat machines and the command point,” he added.

“With the help of the radar-location equipment installed in this technology we can detect the target, and the target becomes visible on the screen, and the commander shares the information with the combat machines that subsequently can execute elimination or tracking,” says Aleksandr Bychenkov, commander of a missile division.

The system has now been deployed in the brigade, the press service of the Russian Armed Forces inform. The new equipment provides enhanced management efficiency of forces and air defense units, and better coordination of their action, enhanced mobility and the improved persistence of equipment in a battle situation, the Armed Forces explain.

According to Janes, the defense and intelligence magazine, the vehicles carrying the Barnaul-T system were first revealed in a 2019 defence and security exhibition. Since then, the system has been deployed in several key units in the Russian Armed Forces.

The 200th Separate Motor Rifle Brigade is part of the Northern Fleet’s 14th Army Corps and is based in Pechenga, Kola Peninsula.