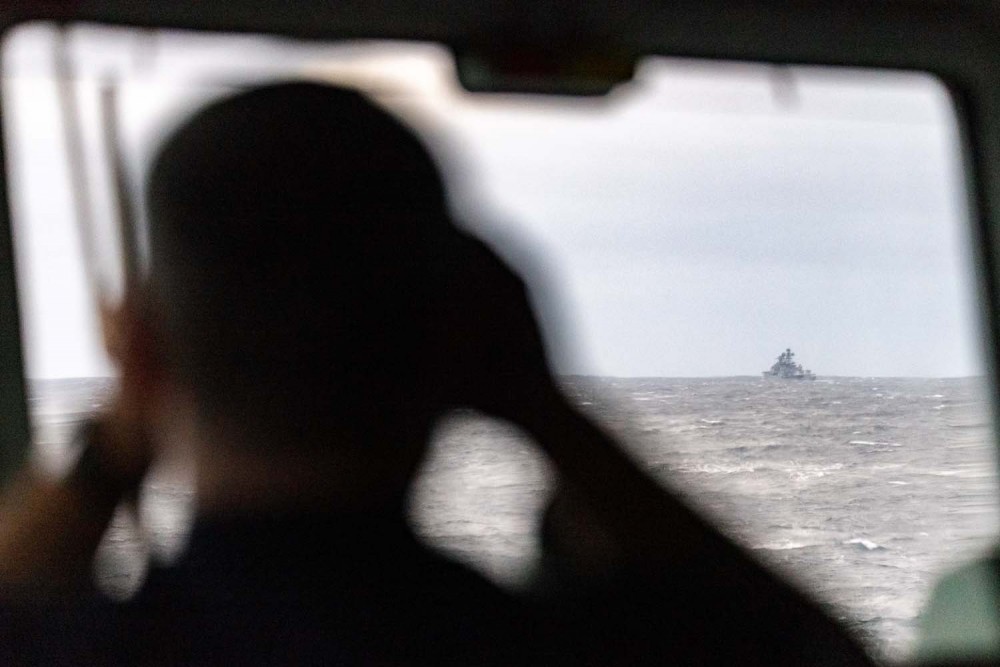 A sailor onboard "HMS Northumberland" monitors the movement of the Russian Northern Fleet destroyer "Vice-Admiral Kulakov" as she sailed North West of the Outer Hebrides, off the west coast of Scotland in late 2020. Photo: Royal Navy

"What the f*** did I just hit?" a crew member onboard "HMS Northumberland" shouted as the Russian submarine crashed into the frigate's towed sonar.
Read in Russian | Читать по-русски
By

The incident happened in late 2020 and was captured by a Channel 5 TV crew filming a documentary onboard the British warship as it was tracking the Russian submarine somewhere in the North Atlantic.

Film footage shows how the crew on watch sound the alarm bell, shouting “what the hell was that”, “shit”, “what the fuck have I just hit.”

A spokesman with the Ministry of Defense in London confirmed what happened to the BBC.

“In late 2020 a Russian submarine being tracked by “HMS Northumberland” came info contact with her towed array sonar.”

“The Royal Navy regularly tracks foreign ships and submarines in order to ensure the defense of the United Kingdom,” the spokesman said.

According to the film crew, the pilots from the frigate’s helicopter had just before the crash spotted a periscope from the Russian submarine. The submarine soon dived and then hit the sonar being towed by “HMS Northumberland”.

The sonar is a cable being trailed hundreds of meters behind the warship with hydrophone listening devices to capture echo sounds from a submarine.

The Royal Navy on December 4, 2020 posted a news update about the monitoring of several Russian Northern Fleet navy vessels in the English Channel and the Celtic Sea to waters west of Scotland. “HMS Northumberland” tracked the destroyer “Vice-Admiral Kulakov” outside Scotland as she was sailing back home to Severomorsk after a long deployment to the Mediterranean Sea.

Exact location of the collision with the sonar is not said, but the incident happened somewhere in the North Atlantic and the BBC reports that the British frigate at the time was searching for the submarine in the Arctic Circle. According to the Daily Mail, the scramble to search for the Russian submarine happened around 200 miles north of Scotland.

If the submarine was sailing together with “Vice-Admiral Kulakov” is not said. The Russian destroyer sailed into the Barents Sea on December 8, a press release from the Northern Fleet said at the time. Port call was made to Severomorsk on December 10, the following press update informed.

Name or class of the Russian submarine is not known, but it could have been one of the Northern Fleet’s nuclear-powered attack submarines of either the Akula or Sierra class based on the Kola Peninsula that regularly sails out to the North Atlantic.

Russian officials have so far not commented on the incident.

United Kingdom and Russia in 2021 updated a 1986 agreement on prevention of incidents at sea. The agreement includes a list of actions each countries´ ships should not undertake against each other in waters beyond the territorial sea. However, the document does not include any text about avoiding dangerous events in regards to submarines, but outlines how the two countries should contact each other in case of incidents at sea in order to avoid escalating situations.